A theatre project explores collective solutions to saving the ocean

By Kira Erwin - The Conversation 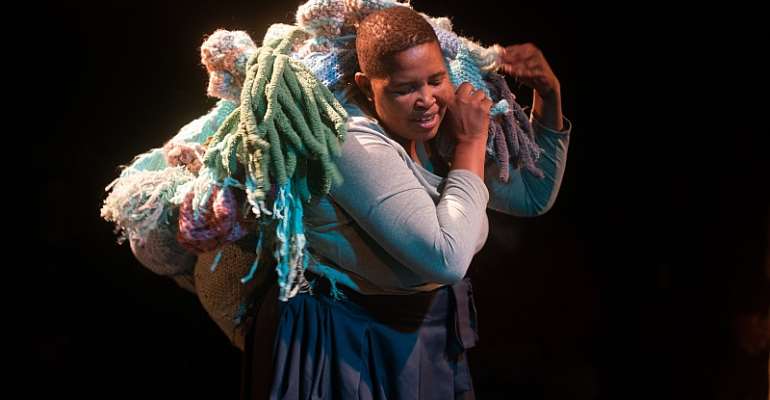 The earth's oceans are under grave threat. Scientists in many fields have pointed to the large-scale negative shifts brought about by human-made pollutants , mining and overfishing .

How people now choose to behave, make collective decisions and build solidarity around the health of oceans has an impact not just on our own species but on all life on earth.

In the drive to rebuild economies after the COVID-19 pandemic, will nation states and big business return to a myopic view of the oceans as a source of GDP growth and shareholder profit? Or could we expand our imaginations to listen to a multitude of voices that care for the ocean?

A theatre production in South Africa has been trying to find a way. The Lalela uLwandle (Listen to the Sea) research and engagement project, implemented along the KwaZulu-Natal coastline in 2019, offers some useful ideas for such an expansion.

A chorus of voices

The idea emerged from a public consultation meeting . It was between community representatives from small towns along the coastline, and the Petroleum Association of South Africa . Many felt they had not been adequately consulted in an environmental impact assessment for permits to drill for oil and gas along the coastline.

The association, a regulatory body meant to consider public needs when granting or denying such licences, was sympathetic to some of the arguments. But the consultation process failed to make room for the different perspectives and concerns in the room.

In response, a team of researchers working in ocean governance from Rhodes University and the Durban University of Technology began the Lalela project. It set out to explore how different coastal people, in and around the coastal city of Durban, make sense of their relationship with the ocean.

The opening question was simple: What are your first memories of the sea? It's important because the symbolic, scientific and spiritual meanings of the oceans are key to understanding humans' relationship with the oceans . Memories, belief systems, stories and myths are powerful ways in which we make sense of our world and choose to act on and in it. Faye (Allison Cassels) recounts the wonder of baby cuttlefish. Casey Pratt

The research team partnered with Empatheatre , a collective who use research-based theatre as a participatory decision-making tool for social justice. They have tackled issues related to street-level drug use ( Ulwembu ), gender and migration ( The Last Country ), and mining ( Soil&Ash ). They wove these incredible everyday stories of the sea, together with archival material, into the production Lalela uLwandle.

On stage among the audience

Lalela uLwandle draws on the stories of three people. Nolwandle is a marine educator whose mother is a Zionist and grandmother a sangoma. Niren is a young environmental activist whose family has a long history of seine-net fishing. Faye is a retired marine biologist reflecting on life as a scientist and activist.

Audience members sit in a circle with the actors and witness these intergenerational stories. They recount how the ocean is linked to, among other things, livelihoods, medicine and healing, and scientific study. Included is the site of the sea for spiritual connections with ancestors.

The play deals with acts of past and present power and exclusion in South Africa. It performs the painful experiences of forced removals under apartheid , which robbed many of a life on the coast. It explores how extractive mining on land and sea, and industrial fishing, continue to create forms of oppression and exclusion. Nolwandle (Mpume Mthombeni) performs the symbolic destruction of homes. Kelly Daniels

It also performs the tensions between environmental justice and environmental conservation. These are frequently played out in real life when local people are restricted from accessing sites of heritage and livelihood in Marine Protected Areas .

Last year the play toured six small towns on the KwaZulu-Natal coast, with a final week's run in Durban . The general public came to watch along with guests invited from government, civil society, small-scale fisher associations, marine science and conservation.

Each performance was followed by a facilitated discussion. In many, audience members grappled with what it means to think collectively in a time of ocean degradation. They asked of themselves and fellow audience members how the hurt and inequalities in our past, and in the present, should shape thinking on ocean governance.

If we listened carefully

South Africa remains deeply divided by racial injustices and economic inequalities . Rather than skirt over these divides Lalela uLwandle told different stories of power and vulnerability. What arose from the research, performances and discussions was how cultural connections offer valuable contributions towards conservation and environmental efforts.

The play offered an invitation to an alternative conversation. One in which culture, science and conservation may, if people learn to listen to each other carefully, find strategic alignment. Niren (Rory Booth) sends a prayer into the ocean for his grandfather. Val Adamson

To find solutions the world desperately needs to become better equipped at more equitable collective decision making. To do that we need to find translation devices between scientific, conservation, cultural and spiritual canons. We need them to spark an imagination for working in solidarity across difference, with and for the oceans that sustain us all.

Lalela uLwandle is led by Dylan McGarry and Taryn Pereira at the Environmental Learning Research Centre , Rhodes University, with Neil Coppen and Mpume Mthombeni from Empatheatre , and Kira Erwin at the Urban Futures Centre , Durban University of Technology. Lalela uLwandle forms part of the One Ocean Hub , a global action research network led by Strathclyde University and funded by the UKRI Global Challenge Research Fund .

Kira Erwin has received funding from the National Research Foundation, as well as other external funders for research projects at the Urban Futures Centre. Her work on Lalela uLwandle is done in-kind with no direct funding.