By Alice Ritchie with AFP bureaus 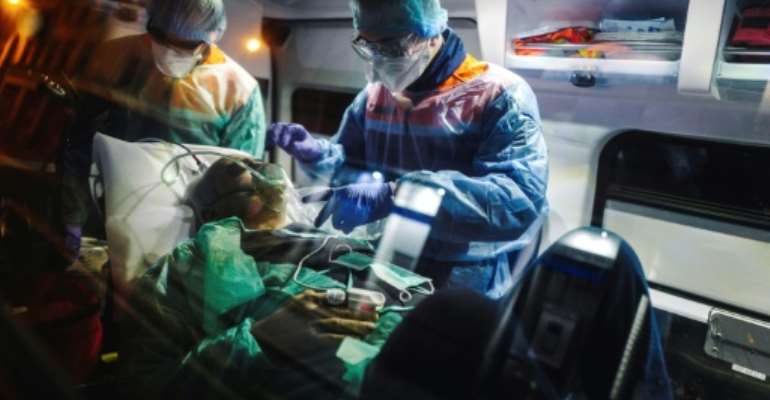 The coronavirus threatened Americans with their hardest week in living memory on Monday and put Britain's prime minister in hospital, despite early signs that some of Europe's hardest-hit countries may be turning a corner.

More than 70,000 people have now died worldwide in the epidemic -- some 50,000 of them in Europe -- and, as the human tragedy continues to escalate, the global economy is plunging into what leaders warn will be a historic recession.

Japan announced an imminent state of emergency and a trillion-dollar stimulus package, while the US surgeon general compared the likely impact of the epidemic in the week ahead to 9/11 or Pearl Harbor and France warned of the worst economic slump since World War II.

In London, Prime Minister Boris Johnson remained in hospital Monday but was in "good spirits" after being admitted for tests for "persistent" coronavirus symptoms.

"The prime minister had a comfortable night in St Thomas' Hospital in London and is in good spirits," Johnson's spokesman said, adding that the 55-year-old British premier remains "under observation".

Johnson tested positive for the virus 10 days ago, and despite his hospitalisation his housing minister Robert Jenrick said the leader was still "in charge" of the government as the country grapples with the continuing crisis.

It was a mixed picture in Europe, where countries already ravaged by deadly COVID-19 outbreaks reported lower numbers of new infections and, in Austria and Italy, began thinking about easing lockdown restrictions.

The new coronavirus has reached almost every corner of the planet, confining nearly half of humanity to their homes and turning life upside down for billions.

The worldwide number of fatalities from the novel coronavirus rose to 70,009 on Monday, according to a tally compiled by AFP.

More than 1.2 million declared cases have now been registered around the world since the epidemic first emerged in China in December.

About three quarters of all deaths have been clocked in Europe, and the US now has the most recorded cases of any country -- along with a steadily rising death toll.

"This is going to be the hardest and the saddest week of most Americans' lives, quite frankly," US Surgeon General Jerome Adams told Fox News ahead of what is expected to be a tough week for already hard-pressed American healthcare providers.

In Tokyo, Prime Minister Shinzo Abe said hospitals in Japan face a "critical situation" and that an emergency could be declared as early as Tuesday.

But there was hope in parts of Europe after a weekend that saw Italy reporting its lowest death toll in two weeks and France its fewest dead in a week.

"The curve has started its descent and the number of deaths has started to drop," said top Italian health official Silvio Brusaferro, adding the next phase could be a gradual easing of a strict month-long lockdown.

In Spain, nurse Empar Loren said: "The situation is more stable. The number of patients in intensive care is not growing much anymore, and we are starting to discharge quite a few."

At a field hospital set up at a Madrid conference centre, staff applauded whenever a patient was healthy enough to be sent home.

The effective mothballing of the global economy is beginning to hit hard with analysts warning millions of jobs will be lost despite unprecedented stimulus programmes.

Germany announced that the government would guarantee loans for small businesses but France was gloomy, with Finance Minister Bruno le Maire estimating that the 2020 crunch would be "far beyond" the previous post-1945 worst case.

But some in poorer countries are already chafing against curfews destroying their livelihoods.

"How can anyone stay home without anything to eat?" asked Garcia Landu, a motorcycle taxi driver in Angola's bustling capital, Luanda.

"Better to die of this disease or gunshot than to starve to death."

Despite the gloom, heartwarming examples of humanity around the globe have lifted spirits, with ordinary people doing what they can to help those on the medical front line.

In a Barcelona restaurant, chefs flipped burgers to deliver to nurses and doctors.

"When you deliver the food and you see they're happy, that makes us happy and it makes us stronger," said delivery man Daniel Valls.

And in the southern Italian city of Naples, a street artist lowered a "solidarity food basket" from his balcony, hollering: "If you can, put something in. If you can't, take something out".

"We started by putting a piece of bread, a bag of pasta, a box of peeled tomatoes," said English-language tutor Teresa Cardo, who also lowered a basket.

"And two hours later, the basket was completely full."