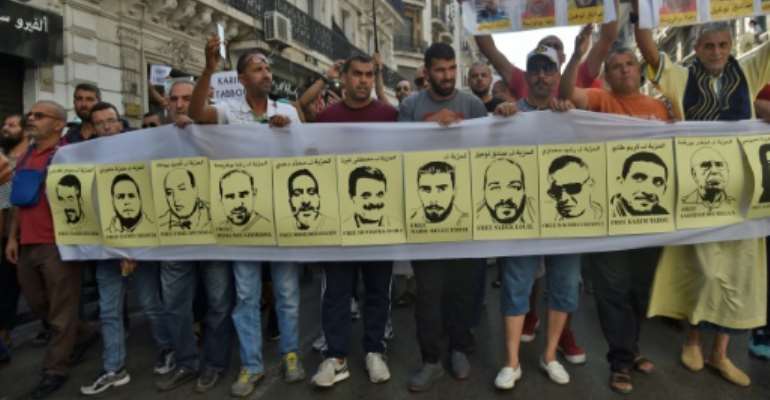 Algerians demonstrate against the arrest of dozens of people by the authorities during anti-regime protests. By RYAD KRAMDI (AFP/File)

An Algerian court on Monday sentenced another leading figure in the country's anti-regime protest movement to one year in prison, part of a crackdown on activists, a support group said.

Abdelouahab Fersaoui, who heads the civic group Youth Action Rally (RAJ), was arrested in October during a demonstration in support of detainees and accused of an "attack on the integrity of the national territory".

The prosecutor had asked for two years in prison for the 39-year-old academic during a trial held behind closed doors because of the coronavirus outbreak.

He denied the charges, which he said were based on his Facebook posts that contained no incitement to violence.

Judicial harassment "continues against activists and detainees during this period of confinement of citizens", it wrote on Facebook.

Said Salhi, vice president of the Algerian League for the Defence of Human Rights, said he was "stunned" by the ruling against Fersaoui who had been hoping to be freed.

"This conviction confirms our concern about the risk of escalating repression," Salhi told AFP.

According to the CNLD, 44 people are detained in Algerian prisons for their links to the "Hirak" protest movement that has rocked Algeria for more than a year.

On March 24, another leading protest figure, Karim Tabbou, was sentenced by an appeals court to a year in prison.

He is due to appear in court again on April 27 in another case for "an attack on the morale of the army", his lawyer said Monday.

He stepped down in April after losing the support of the army, but protesters continued to hold mass rallies demanding a sweeping overhaul of the ruling system.