President Akufo-Addo: The Man Who Inspires In Speech And Action 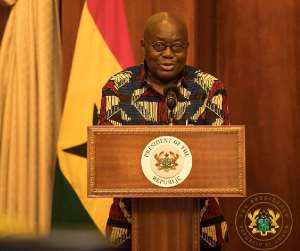 I woke up yesterday to depressing news for any health professional like myself which is that 2 professionals at Korle-Bu teaching hospital tested positive for COVID-19. This was particularly sad considering the recent threats of a sit down strike issued by some staff of the Nation’s number one referral facility. I therefore set out early in the day to start an advocacy on Facebook calling for solidarity for our health care workers who are at the frontline in the battle against the invisible enemy. This campaign was despite the fact that I was very certain Government had so far done extremely well in supporting frontline healthcare workers like the provision of Personal Protective Equipment (PPE) and the special insurance packages secured for them. It was also notwithstanding the fact that in this pandemic, “no where is cool” in the whole world as far as the lag in equipment, drugs or mitigation efforts are concerned and this is evident to anyone who monitors events across the globe.

Thus, whilst praying and hoping, little did I know that President Akufo-Addo was in his special kitchen “cooking” an outstanding package for not only the health care professionals but the entire citizenry. In his 5th address to the Nation in the wake of this COVID-19 pandemic, our President was a true manifestation of Bob Riley’s quote “Hard times don’t create heroes. It is during the hard times when the ‘hero’ within us is revealed”. Through the comprehensive package announced by President Akufo-Addo, it will be evident to the average Ghanaian that we indeed have a hero in these tough times. And like it has often been said, stress is the fertilizer of creativity but only for those who have the foresight. Our President has once again shown the required leadership just when it is most needed.

Other measures like waiving water bills for the next 3 months across the country as well as mobilizing water tanks to make water available for vulnerable communities are key interventions critical to the control of the spread of the disease since one of the advocated preventive measures is the constant use of water for hand washing. His call for a cease to disconnections in electricity and water by the relevant companies as well as supply of food to those in need are very sensitive measures which show his appreciation of the plight of Ghanaians in these tough times.

To me, these interventions which I call an “addendum” to previous robust ones, are as inspiring as his motivating speeches as far as fighting the COVID-19 pandemic is concerned. I believe strongly that not even the man who sought to create the impression that the President’s 4th address was a flowery speech that caught the eyes of only people outside Ghana but empty in the lives of Ghanaians will attempt watering down the impact of this speech. It is left with only unrepentant opponents the likes of who were described by a Fox New anchor in America that even if President Trump succeeds in siphoning all the coronavirus from the blood of all infected people in the world, his sworn critics will still say he has done nothing.

We thank you President Akufo-Addo and we are solidly behind you with support and prayers as you lead this country through these difficult times.