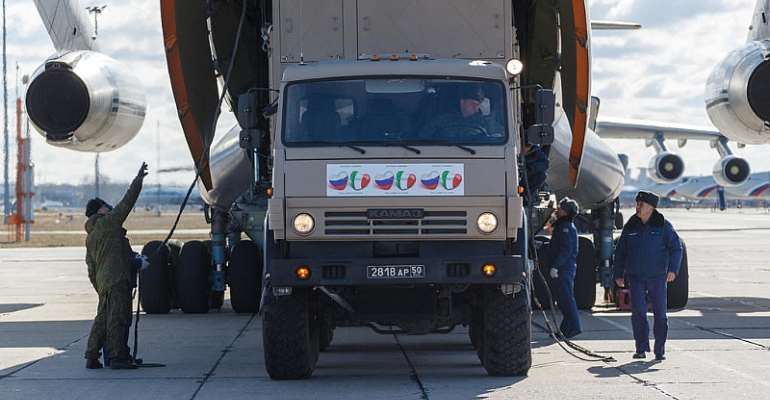 Italy engaged in a war of words with Russia on Friday over allegations Moscow hid spies among doctors it had sent to the country's coronavirus epicentre near Milan. The team is part of a large-scale Russian operation to assist Italy in its fight against the virus. But EU critics say Moscow has a hidden agenda. Russia strongly denies the charges.

Planeloads filled with Russian aid arrived last week in northern Italy - the area that the virus hit hardest in the world - to help fighting the country's Covid-19 crisis.

According to the website of the Kremlin, Italian Prime Minister Giuseppe Conti requested Russia's help during a telephone conversation on March 21st with Russian president Vladimir Putin.

According to the Russian embassy in London, the Russian defence ministry delivered 15 planeloads to Italy with 60 tons of cargo each, 122 experts, including 66 servicemen "of the radiological, chemical and biological defence troops," eight teams of doctors, and one full laboratory.

But some observers in Italy are skeptical.
“Probably the assistance is useful to some extent,” says Sergio Germani, director of the Gino Germani Institute for Social Sciences and Strategic Studies (GGISS), a Rome-based think tank.

“It's also a propaganda operation that is aimed at Italian public opinion and reinforces the idea that Italy did not get any help from the EU or from Nato allies and that only countries like China and Russia are really helping,” he says.

After the arrival of the Russian military in Italy, Italy's La Stampa newspaper on April 2 quoted former Nato chemical weapons expert Hamish De Bretton-Gordon, saying that "without a doubt, there are GRU officers among them".

“The objective of Moscow, and possibly of the Chinese is the weakening, and possibly the collapse, of the European Union,” says Germani, whose institute, the GGISS, studies the influence of Russian propaganda and pro-Moscow media on the internet.

'Kill elderly Italians'
The Russian aid operation, he says, went accompanied by a surge of pro-Russian articles, videos and tweets.

According to EU vs Disinfo, a European Commission watchdog against fake news, pro-Kremlin media outlets like Sputnik news agency and internet “troll-factories” are responsible for spreading unsubstantiated rumors.

In an article dated March 31st, the Latvian version of Sputnik published a story suggesting that the coronavirus was created in EU-member state Latvia “designed to kill elderly Italians.”

“These are the messages they are pushing,” says Germani “ - that the EU is incapable, that it is crumbling and that the EU does not exist anymore,”

“They are messages that discredit liberal democracy as a form of government that is incapable of dealing with this kind of crisis,” he says.

Russia was quick to hit back at the criticism.
Attacking the British press, that also reported on the article in La Stampa, the Russian embassy in London deplored that journalists are “seeking to find discrepancies and a hidden agenda in Russian humanitarian assistance rendered to ... Italy in order to help them combat the coronavirus pandemic,” stressing that “this help is free of charge and humanitarian by nature. It is a sign of our solidarity with the Italian people, not linked to any political agenda.”

Europe steps up coordination
On March 31st, EU leaders announced a concerted Roadmap" and an "Action Plan" to deal with the crisis. "The only way forward is a common strategy in a spirit of solidarity," said EU Council President Charles Michel.

“The EU is beginning to respond positively to this major challenge," says Germani.

"They are moving in the right direction, because they are now aware of the fact that the Kremlin is trying to exploit the emergency," he says.