Algeria jails journalist for 'concealment of equipment' during protests 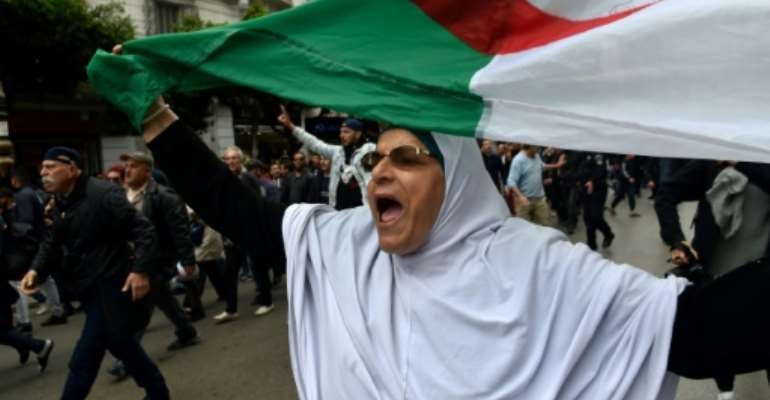 An Algerian woman waves a national flag during an anti-government demonstration in the capital Algiers on March 14, 2020. By RYAD KRAMDI (AFP/File)

An Algerian court on Sunday sentenced to eight months in jail a journalist who had provided images of months-long anti-government protests to foreign media, a prisoners' support group and a non-government organisation said.

Sofiane Merakchi, a correspondent for Lebanese TV channel Al-Mayadeen, was accused of "concealment of equipment and providing images to foreign media without authorisation", the Article 19 NGO said.

He was also accused of providing images of weekly Friday protests to Al-Jazeera and other foreign media organisations, the group added.

Merakchi was arrested in September 2019 and initially the state prosecutor had demanded he be sentenced to two years in jail.

But a court in Algiers handed him an eight-month sentence and the CNLD prisoners' support group said Merakchi was now expected to be freed on May 26.

According to the CNLD he was the first Algerian journalist arrested after the protest movement first erupted in February against ailing president Abdelaziz Bouteflika's bid for a fifth term in office.

In April last year, Bouteflika, debilitated by a 2013 stroke, resigned in the face of massive streets protests and after loosing the support of powerful army chief Ahmed Gaid Salah.

Merakchi's case received little media attention for months following his arrest but there was more coverage after Algerian authorities detained more journalists, some of whom remain behind bars.

Among them is Khaled Drareni, correspondent of French channel TV5 Monde and media watchdog Reporters Without Borders (RSF), who has been in pre-trial detention since March on a charge of inciting an unarmed gathering and endangering national unity.

Earlier this week RSF, in a statement co-signed with Algerian non-government organisations, called for the release of Drareni, Merakchi and fellow journalist Belkacem Djir.

The watchdog accused Algeria's government of taking advantage of the coronavirus pandemic to "settle scores" with independent journalists.

The reasons for Djir's imprisonment are unknown.

In early March, justice minister Belkacem Zeghmati said Djir and Merakchi were both being prosecuted for "common law acts", without giving details.