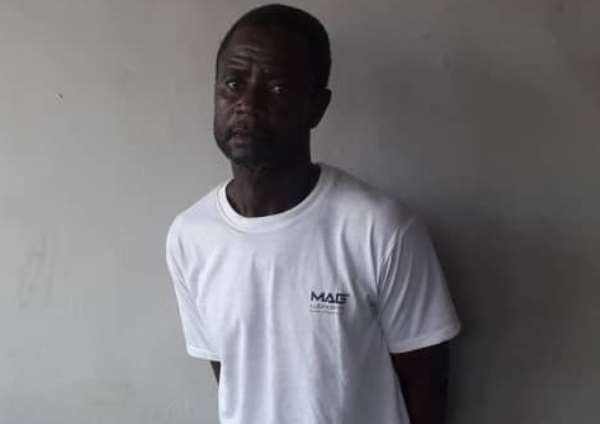 King Solomon City, a suburb of Adjei-Kojo in the Tema West Municipality of the Greater Accra Region was ill n shock after a woman was found burried in an uncompleted building.

The police has arrested a 46-year-old man who is believed to have killed his wife and buried her in the uncompleted building.

John Tetteh Korley alias Yakini, a welder allegedly killed his wife, Felicia Teye, 34 years in his room and buried her in footing of the building after accusing her of infidelity.

According to her, the couple have been at loggerheads as the man has always accused his wife of cheating on him.

She noted that preliminary investigations revealed that the man has never trusted his wife and always accusing her flirting with other men and also threatened severely to kill her.

The commander continued that the situation compelled the woman to leave her matrimonial home to stay with her family at Asesewa in the Upper Manya Krobo District of the Eastern Region.

On Saturday, March 25, 2020, the man contacted the woman via mobile phone to come for their two children ahead of the partial lockdown due to the COVID-19.

According to Chief Superintendent Mensah, the victim then told her family members that she was going for the kids at Adjei-Kojo.

“On Tuesday, brother of the woman travel from the village in search of his sister after several attempts to reach her proved futile. The woman's brother reported the matter to the police.

She however, he said intelligence led police to the discovery of the body in the uncompleted building and police started to hunt for the suspect.

“Police started searching for the suspect and went to the workshop where we were told the suspect complaint of stomach problem and was rushed to the Ashaiman Polyclinic by some residents but was later referred to the Tema General Hospital.

“He was apprehended by police on admission at the Tema General Hospital and sent to the crime scene where he confessed to the crime and helped Environmental Department of the Tema West Municipal Assembly to help retrieved the body,” the Chief Superintendent added.