Pandemic underscores gross inequalities in South Africa, and the need to fix them

By Lauren Graham - The Conversation 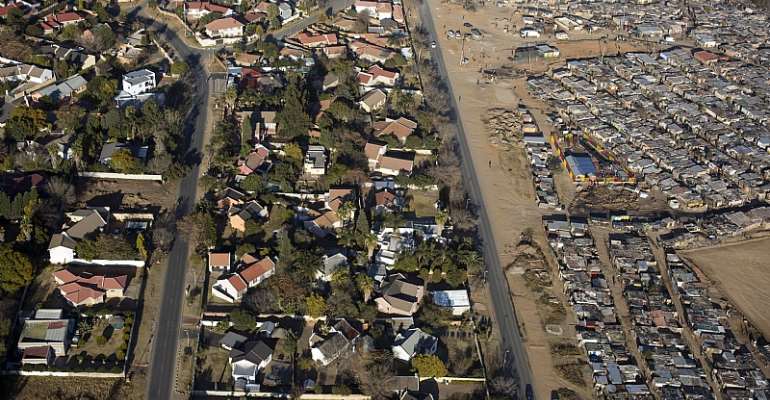 Now more than ever, South Africans are painfully aware of the inequalities that continue to play out in the country. In people's pre-COVID-19 lives, the realities of living in a country that is among the most unequal in the world were easily overlooked. The pandemic shines a very bright light on this reality. It asks us to fundamentally address them – not just at this time of the pandemic, but as a social justice imperative.

As messaging about preventing the coronavirus ramped up, the consequences of inequalities in the provision of basic service provision in the country have become clear. These disparities between rich and poor are reflected across a range of interventions that have been put in place to manage the pandemic and its social and economic consequences. These include access to water, housing circumstances, as well as people's very high dependence on social grants and the informal sector for income.

Five areas where inequality is starkest

Living circumstances: The preventive measures have highlighted inequalities in living circumstances. Take the case of hand washing. The 1.1 to 1.4 million people who live in informal settlements in South Africa don't have access to water in their homes or in their yards. An estimated 19% of the nearly 19 million people living in rural areas lack access to reliable supply of clean water; 33% do not have basic sanitation . This makes regular hand washing difficult. And social distancing or quarantining is near impossible when water access and ablutions are communal, and where settlements are overcrowded.

Livelihoods: For many people at the upper end of the wage spectrum, working remotely has been relatively easy, with limited impact on their ability to earn a living. Such workers are in the formal labour market. They are protected by both a legal and social contract as well as a safety net of unemployment benefits .

Small business owners will be under significant pressure in the coming weeks and months. But they will be partially cushioned by the business support measures announced by the government.

In contrast, the most vulnerable workers will struggle without support at this time. Casual workers (like many domestic workers), those who are self-employed (such as Uber drivers), and those working in the informal economy are not protected by legal contracts.

In general these workers, who make up over 20% of South Africa's workforce , cannot access unemployment benefits. They will be under enormous pressure financially, potentially unable to feed themselves and their families.

President Cyril Ramaphosa has made it clear that the government is aware of these challenges and will move to ensure support . But it remains to be seen what that entails.

The directive by the Department of Basic Education was to ensure that learning continued by providing workbooks and worksheets online. But, many parents will be facing the very real struggle of supporting their families in a locked down economy. This, and other problems, including limited access to technology and data, means that many parents will struggle to supervise their children's learning.

Equally concerning is how this will affect education outcomes in the longer term. Analysis already shows how learning backlogs in the early years, forged in an unequal education system, are compounded over time. Further backlogs under the current situation are likely to have long-term effects.

Access to the internet: Manuel Castells, a sociologist concerned with the internet age and inequality, notes in his book The Internet Galaxy :

The fundamental digital divide is not measured by the number of connections to the Internet, but by the consequences of both connection and lack of connection.

At universities and other higher education institutions, wealthier students have been able to switch to online learning quickly, while poorer students battle with high data costs.

Food security: The effects of panic buying on the food security of people with limited income has received attention . But a less well-known impact of the measures is that over 9 million children will not receive a daily, nutritious meal while schools remain closed.

The National School Nutrition Programme potentially has positive effects on reducing stunting and obesity . In the face of prolonged school closures, these children face increased food insecurity, with potential long-term consequences for their health.

There have been heartwarming responses from the public to ensure that food packs are provided to children. But it is simply not possible to reach the over 9 million children who depend on this meal.

The measures announced by President Ramaphosa to mitigate the problem reflect an understanding of how existing inequalities will affect especially the most vulnerable people, and a willingness to address the problem.

While there have been relatively quick changes to existing mechanisms to provide support to small, medium and micro enterprises there are, as yet, no measures to protect informal and casual workers and ensure cash injections into vulnerable households.

The country needs to devise a social contract to better address the vulnerabilities that low-wage, casual and informal workers face daily .

The country must also move towards having low-cost, reliable internet access that can open up opportunities for learning and work for its most vulnerable citizens. Basic services – such as clean water, electricity and sanitation – must also be of a quality that not only promotes people's right to dignity, but also help protect people from the effects of such a pandemic as COVID-19.

This pandemic highlights how crucial it is to fundamentally address the inequalities that exist in South African society. If a social justice imperative does not push us to do so, perhaps the realisation of mutual connections, borne of a pandemic that knows no class or race lines, will.

Read more: South Africa can – and should – top up child support grants to avoid a humanitarian crisis

Lauren Graham does not work for, consult, own shares in or receive funding from any company or organisation that would benefit from this article, and has disclosed no relevant affiliations beyond their academic appointment.