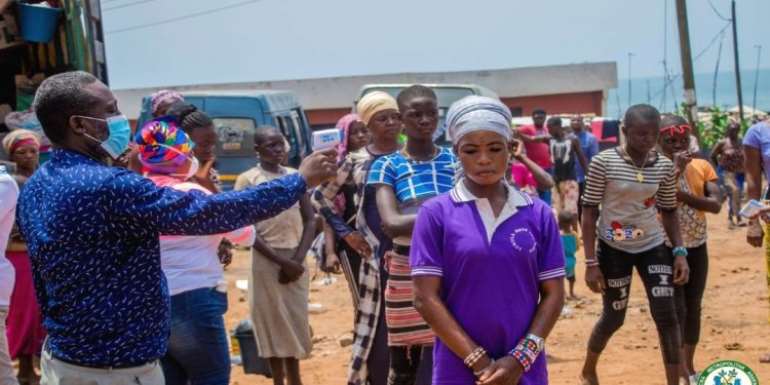 Ranking Member on Parliament's Gender and Children Committee, Hajia Laadi Ayamba is asking for the voluntary testing of head porters, also known as Kayayei under the care of government for the novel coronavirus.

As part of measures to reach out to the vulnerable in the period of partial lockdown, the government is providing food and shelter to some head porters and other such individuals.

Speaking to Citi News, the Pusiga MP indicated that testing these persons will help ascertain the level of risks these vulnerable persons are exposed to.

“What we hear is that they have been sent to certain places and are being fed. How sure are we that the food and running water are enough? It’s still a good thing but what measures are we putting in place to ensure that at the end of the day, these people are not the same persons who will get back into communities and then maybe bring problems?” she asked.

“I am talking about even voluntary testing. Just let them understand that if they are tested and they come out positive, they will go into treatment for about 14 days or one month. Once they know that government will be the one who will take up this, they’ll really come out themselves for the test. But we’ve just kept them there and we say we are feeding them. It’s not a matter of feeding them. Some of them it’s not a matter of they only getting food to eat. They are the breadwinners of their families back at home. And so there is still a lot to be done,” she added.

Kayayei fleeing to their hometowns

Following the announcement of a partial lockdown of Accra, Kasoa, Tema and Kumasi, head porters in Accra made the move to return back to their homes in northern Ghana.

Unfortunately for some of them, Police at Ejisu in the Ashanti Region intercepted two cargo trucks which were transporting over 70 kayayei, up north on Monday, March 31, the day the lockdown began.

The drivers had covered the trucks with tarpaulins to try and outsmart the security personnel stationed at the various checkpoints.

Passengers onboard the vehicles were mostly head porters who were travelling with their children in a bid to escape the partial lockdown in Accra.

The police then instructed the driver to return them back to Accra.

This was after a huge number of people, mostly kayayei had left the capital to Bimbilla in the Nanumba North Municipality of the Northern region a day before.

A COVID-19 taskforce formed by the Nanumba North Municipality directed all the buses to the Bimbilla Senior Hgh School where their temperatures were taken and sensitized on COVID-19 preventive measures.

Upon return to Accra, the Accra Metropolitan Assembly (AMA) provided the kayayei with temporary shelter.

They were screened in accordance with the COVID-19 medical protocols, given food, water and soft drinks by the AMA and the BN Michael Ministries.

The government has also committed to feeding and housing all needy kayayei in Kumasi and the Greater Accra Region during the partial lockdown.

At a press conference on Wednesday morning, the Minister for Gender, Children and Social Protection, Cynthia Mamle Morrison, revealed that the government had already scouted possible locations for housing the kayayei.

The Minister also noted that the state had gotten support from some corporate bodies and groups which have committed to providing meals for them “so all in all we have enough food for them”.

In addition, to the food and housing, the kayayei will get further education on the novel coronavirus prevention.

The Vice President, Dr. Mahamudu Bawumia, has also donated GHS500 to each of the stranded kayayei who were stopped at Ejisu on their way to the Northern Region.

You disappointed Assin North MP, you abandoned him in court ...
59 minutes ago