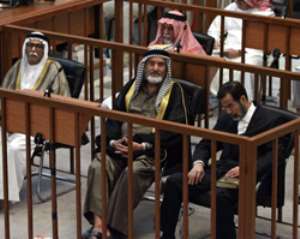 he trial of Saddam Hussein and seven others accused of crimes against humanity has been adjourned on Wednesday until May 22 after the court heard defence witnesses for four lesser-known defendants.

Defence lawyers put witnesses on the stand in Saddam Hussein's trial, trying to show that several low-level Baath Party officials had no role in a crackdown against Shia in Dujail in the 1980s.

Saddam, who faces a possible death sentence if convicted on charges of crimes against humanity, appeared jovial in the session on Wednesday, smiling as he entered and joking with the judge when one of his co-defendants, Mohammed Azawi Ali, shouted that he had nothing to do with the crackdown in the Shia town of Dujail.

Now in its third day, the trial is focusing on witnesses on behalf of three low-level defendants in the case - Ali, Abdullah Kazim al-Ruwayyid and his son Mizhar, who were Baath Party officials in Dujail.

Abdel-Rahman had barred Saddam and the other three defendants from attending Tuesday's session and refused the defence's request that they attend.

He changed his mind on Wednesday, telling the court that all the defendants would be allowed to be present, in case their names came up in the testimony.

Speaking from behind a curtain to protect their identity, witnesses continued to testify on behalf of the four Dujail defendants.

In the spotlight on Wednesday was Abdullah al-Ruwayyid, who had been described on Tuesday as a classic tribal elder who looked after his people.

"He was kind and well known and intervened in the smallest problem," one witness had said. "When the tribes met, they could only agree if he was there."

That theme continued on Wednesday, with a witness describing al-Ruwayyid as a "good man," who would have had nothing to do with security.

Mizhar Abdullah al-Ruweid is accused of leading police to villagers who were arrested, interrogated and executed.

Late on Tuesday night, the office of Najib al-Nuaimi, a Saddam defence lawyer and a former Qatari justice minister, told Aljazeera that he and his colleague Ziad al-Najdawi, a Jordanian, were threatened by the security forces of the Iraqi interior ministry.

No further details were given.