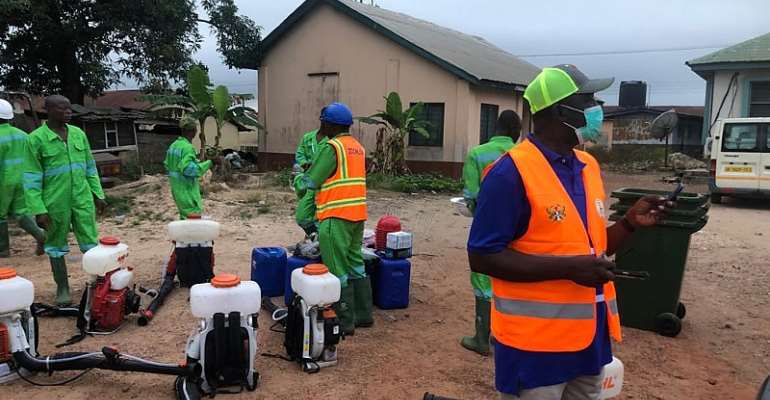 The fight against the worldwide pandemic; Corona Virus, has been very challenging. The Atiwa East District began its own war against Covid-19 on the 13th of March, 2020. The Member of Parliament Hon. Abena Osei Asare working with the leadership of the Atiwa East District assembly, Hon. Lawyer Kwabena Panin Nkansah, have made provisions to help curb the spread of the virus.

Anyinam, the District capital of the Atiwa East District is located between Greater Accra and Ashanti Region of Ghana. It is a town that has the main road connecting these two great regions in Ghana and therefore has a role to play in stopping the spread of the virus.

The District sensitized its populace through information centers, announcement vans, and print media. A conscious effort has been made to place “veronica buckets” in front of all institutions and at strategic locations within the Anyinam township. Hon. Lawyer Kwabena Panin Nkansah has made sure all privately owned facilities have veronica buckets and soaps for handwashing.

A section of the Anyinam market has been separated for the interim. This is a measure to prevent the crowding of people when they are going about their commercial activities.

Today, April 4, the District Chief Executive, Hon. Lawyer Kwabena Panin Nkansah led a team to disinfect the principal streets of towns and toll booths located at Akyem Sekeyere on the main Accra-Kumasi road, as well as markets within the District. The exercise was successful and void of any obstructions as the people of Atiwa East District adhered to instructions and stayed indoors during the exercise. During the exercise, all members were armed in their Personal Protective Equipment’s (PPEs) and safety measures were highly observed.

The Hon District Chief Executive commended the team for a good work done and promised his continuous support to stop the spread of the virus within the District, the Nation and the World at large.