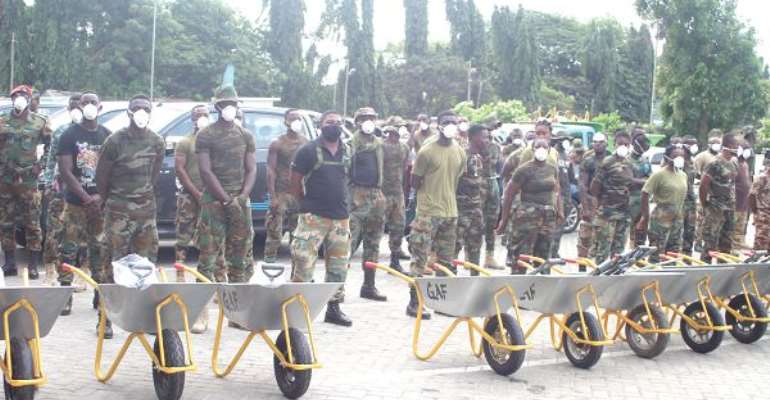 The Metropolitan, Municipal and District Assemblies (MMDAs) in the Greater Accra Region have commenced a major clean-up exercise to help rid the city of filth.

The exercise involves de-silting of choked gutters, sweeping of major streets and evacuation of hundreds of tonnes of waste from various parts of the city.

Waste bins filled with rubbish which pose a health threat to members of the public are also emptied.

The clean-up by the MMDAs is in response to a directive by the Ministry of Sanitation and Water Resources (MSWR) for them to use the two-week restriction on movement that has been placed on the Greater Accra Metropolitan Area to curb the spread of the COVID-19 as an opportunity to improve on their sanitation situation.

The launch of the clean-up exercise at the Accra Metropolitan Assembly (AMA) attracted some government officials, such as the Minister of Finance, Mr Ken Ofori-Atta; the Minister of Sanitation and Water Resources, Ms Cecilia Abena Dapaah; her deputy, Mr Michael Yaw Gyato, and the Deputy Greater Accra Regional Minister, Mrs Elizabeth Sackey.

The Metropolitan Chief Executive for Accra, Mr Mohammed Nii Adjei Sowah, and the Executive Chairman of the Jospong Group of Companies, Mr Joseph Siaw Agyepong, were also present at the launch.

During the event, Zoomlion presented 10,000 hand sanitisers, 5,000 nose masks, as well as wheelbarrows and brooms to facilitate the clean-up exercise.

The MSWR presented 3,000 bottles of water, while Unilever Ghana Limited donated 250 cartons of soap to support handwashing, which is a key requirement to curb the spread of the COVID-19.

Shortly after the launch of the clean-up exercise, a joint team, made up of 250 men from the Ghana Armed Forces (GAF), 35 from the Prisons Service and others from the Ghana National Fire Service (GNFS), was deployed, together with over 1,000 workers of Zoomlion, to undertake the clean-up of some parts of the city.

The acting Commander in charge of the Support Services Brigade, Col Kenneth Kwaku Kwaah Kumi, led the team of security men for the exercise.

Waste management trucks, mechanical street sweepers, excavators, wheelbarrows and shovels were among the logistics deployed for the exercise.

The team visited areas such as Agbogbloshie, Okaishie, the Rawlings Park and the Kwame Nkrumah Interchange, where they de-silted choked gutters, cleared litter from main streets and emptied litter bins at various locations.

While mechanical street sweepers were used to clean the main streets of Accra, excavators were also deployed to evacuate hundreds of tonnes of waste from choked gutters.

Some of the participants, with rakes, shovels and wheelbarrows, gathered the refuse, while heavy-duty trucks collected the waste for proper disposal.

As expected, the Agbogbloshie area was the major action spot, as the team had to deal with some market women who were actively engaged in business, in spite of the restriction on movement in the wake of the COVID-19 pandemic.

The Minister of Finance lent his support to the team and assured them of the government's commitment to make resources available to help keep Accra clean.

He urged members of the public to strictly adhere to hygienic practices to prevent the COVID-19 from spreading.

Ms Dapaah said the clean-up exercise was strategic, since there was little activity in the markets and the streets because of the stay-at-home directive.

She stressed the need for all households to take advantage of the one-bin, one-household policy to acquire bins for the proper disposal of waste.

She also urged members of the public to use the restrictions on movement in Accra as an opportunity to clean their homes and surroundings.

"By God's grace, we will chase away the COVID-19, but after that the rains will come, so let us continue to observe personal and handwashing hygiene to prevent cholera outbreak," she said.

For his part, Mr Sowah reiterated the fact that the city authorities would enforce sanitation laws to clamp down on people who littered the city.

"When we are back from the partial lockdown of Accra, we should be sure that we are going to enforce the law to the letter to keep Accra clean," he said.