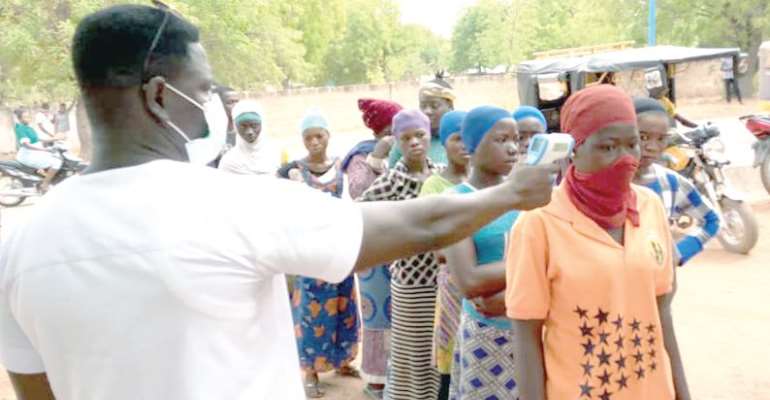 Though the municipality was not part of the areas affected in the movement restriction as directed by the President, the move was largely to ensure that a number of the kayayei who had been trooping home to escape the restriction in Accra and Kumasi were not infected with the virus.

Barriers were mounted around Nasia, the main entrance to the West Mamprusi Municipality of the North East Region, where all passengers on board buses from the southern part of the country were screened before being allowed entry into the area.

About 400 passengers aboard 27 vehicles were screened with no symptoms of the virus identified.

Escape
President Nana Addo Dankwa Akufo-Addo on March 27, 2020, announced the movement restriction starting Monday, March 30, 2020, in Accra and parts of the Ashanti Region as an enhanced measure to prevent an increase in the communal spread of COVID-19 cases after closing down all borders --land, sea and air space.

Shortly after the announcement, many people started escaping from the affected areas to the exempted regions.

Last Monday, a total of 171 head porters were arrested in two DAF cargo trucks escaping the movement restriction in Accra.

They were made up of 51 children and 120 nursing mothers who were heading to the northern part of the country, particularly Walewale.

Quarantine centre
The West Mamprusi Municipal Chief Executive, Mr Issahaku Aremeyaw Somo, in an interview with the Daily Graphic, said adequate measures had been put in place to ensure that all head porters who arrived were screened and monitored to ensure that they were safe to live with their families.

He indicated that the Walewale Senior High Technical School had been prepared as a centre to quarantine persons who may show symptoms of the virus upon arrival.

He said so far, the municipality was safe with no record of the virus and that all suspected cases recorded had tested negative.

"We actually wanted to do that with people who had high temperature but all those screened were normal. We took vital information about them and how they can be contacted and monitored in their various homes, including the communities they come from, house numbers and contacts.

“So, the place we prepared is still there for potential cases, but no one has been quarantined so far,” the MCE stated.

Sensitisation
Mr Somo indicated that the assembly in collaboration with its stakeholders was embarking on a massive sensitisation exercise in the various communities to educate the people on how to protect themselves against the pandemic.

He added that "we are distributing some sanitisers, liquid soap and Veronica buckets to some chiefs, stakeholders and market women, all in an effort to fight the virus."

While commending the Municipal Health Directorate and the District Police Command for their support in this trying moment, he advised the people of the area to continue to practise the safety precautions recommended by health experts to avoid the spread of the virus.