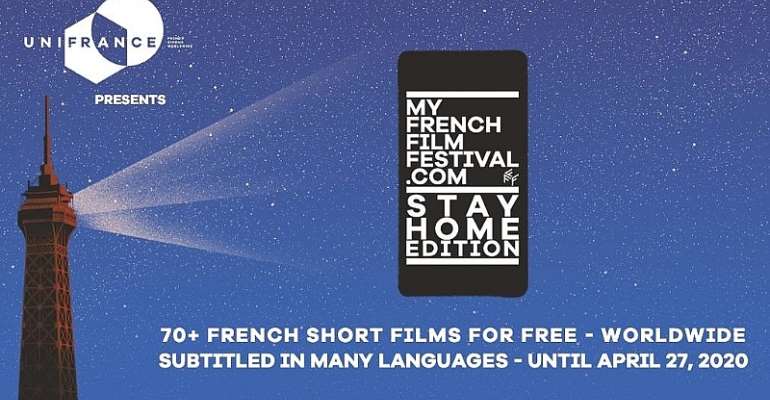 Confinement due to the coronavirus has meant many families have found themselves cooped up inside for days at a time, unable to go about their daily lives, sometimes with tempers fraying. The My French Film Festival 'Stay Home Edition' has made over 70 short films available online, available in 10 languages, free to the public until 27 April.

"Short films...to escape, have fun, reflect, learn, marvel, laugh, to open a window - even virtual - to the world, to fight against boredom and to remember that cinema and culture can play a beneficial role in the serious health crisis we are going through," according to a statement by the My French Film Festival organisers.

"There's something for everyone," enthuses Daniela Elstner, the director of Unifrance, a government supported body which has been promoting French cinema projects throughout the world since 1949.

She explains that My French Film Festival, now in its tenth year, is just one of the many examples of cultural events that Unifrance helps to organize.

The competition itself happens every year between January and February, and awards three major prizes to budding filmmakers.

For the 'Stay Home edition', 27 March – 27 April, the MFFF selected over 70 of the best short film entries from the last ten years, organising them into various themes such as 'portraits of women', 'kids corner', 'teen spirit', 'what's going on ?' and so on.

Thanks to partner company Titrafilm, the subtitling was already available in ten languages meaning the films are instantly available to a wide audience.

"It's our way of contributing something to the world in these times. The subtitles give us direct access to a public," Elstner says.

The French Touch
In its monthly report for January 2020, Unifrance noted that French productions made up 2,39 million entries worldwide, worth some 15,5 million dollars in revenue.

France is the second biggest exporter of films in the world, with around 65 million people on average watching French films every year at the cinema.

In top position in January this year for cinema entries, Unifrance cites the Roman Polanski historical epic An Officer and a Spy (J'accuse) followed by The Portrait of a lady on Fire (Portrait de la Jeune fille en feu) directed by Céline Sciamma and The Specials (Hors Normes) by Olivier Nakache and Éric Toledano in third spot, an example of the diversity of subjects treated by French filmmakers.

"We have many 'French touches'," says Elstner. "There's a great diversity in French cinema. It's very rich and that makes it so special for foreign public. You can go from films that are successful romantic comedies to very specific art house titles that might win a lot of awards, like Portrait of a lady on fire, which has had a great success in the US and the UK."

"We have a wide range of different films, and this makes a difference."

Young and free
The aim with the 'Stay Home' festival is to attract an even wider audience, beyond the usual film-buffs.

Elstner says they can already see younger audiences logging on and people who wouldn't normally go to the cinema. In some countries, French films are not released at all, so seeing them online is the only way.

Unifrance has also worked with the French Institute branches internationally this year to source films which are appropriate for very young audiences, sometimes with no dialogue at all, which means they can cross culture and language barriers.

Making films available to the whole family was an important objective for the Stay Home edition, as was the notion of free access.

Normally, the yearly festival works with other online platforms which viewers can access by paying a small fee. However, due to the coronavirus crisis, Elstner says with the agreement of all partners involved, they decided to break down the pay wall and make it accessible to everyone for one month.

Effects of coronavirus
Elstner explains that the full effect of the crisis won't be felt until later, but clearly Unifrance and other organisations are already re-thinking their approach to managing the backlog of film releases that have been postponed and festivals that were called off, such as Cannes.

"It will be a big challenge, because there will be many films and we don't know if the festivals will be able to take all of them, or some of them, and what do we do with the others?"

"We don't know the overall situation yet, but we are working with our distributors to work out how to handle the releases that have to be rescheduled."

In any case, Elstner has faith that the French cinema industry will get back on track to recover from the crisis.

Elstner, originally from Germany, says she was struck when she first came to France by how much cinema is part of the global culture.

French support for cinema
"Going to the cinema is something every family does and the politcians and the public institutions do care about it. It's really one of the arts they support."

"As a company owner (previously) I was always very grateful to the French government for all the initiatives they made for French films, in particular for export sales."

"Now I'm very happy to bring my experience to the service of French cinema, to somehow give a little bit back to all I got from France."

Despite the enthusisam for the online offers and the new technology that is making cinema available to worldwide audiences confined to their homes during the coronavirus lock down, Elstner is adamant that cinema remains a shared experience and the physical connection to other cinema goers is difficult to replace.

"There's nothing quite like chatting to your neighbour about the film you just saw, especially at a festival."

"I really think something happens when we are all together, exchanging, talking about films after a screening."

"Our world is going to change, and probably some things will be swtiching, but I think this very specific moment of a film festival – you can't replace it."