What to do with asparagus when restaurants and markets are shut down? 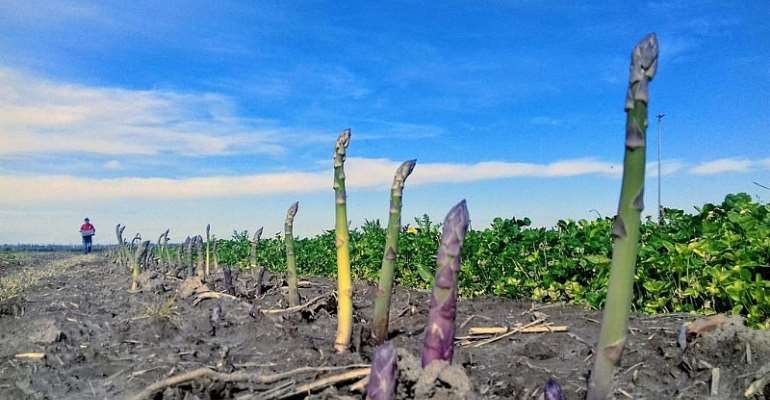 France has asked supermarkets to prioritise French fruits and vegetables, as border closures and confinement measures to stop the spread of Covid-19 have affected supply chains.

Farmers faced with their spring harvests have welcomed the move, but there is skepticism about supermarkets' intentions. Some have been developing alternative distribution models, which may or may not outlive the coronavirus crisis.

Thibault de Vulpillières started harvesting his asparagus crop three weeks ago, in the middle of March. The long, delicate stalks, green or white stalks (depending on whether they are exposed to the sun) are considered a delicacy, and they are one of the first vegetables to ripen in the spring in France.

“Asparagus is the very first spring vegetable, so restaurants call us as soon as they see the harvest starting,” he says. “They are tired of cooking winter root vegetables, and they rush towards asparagus.”

De Vulpillières runs a family farm 30 kilometres south of Toulouse, in the south of France, growing mostly wheat, soy and corn, typical crops for the region. Since 1995 they have also been growing six hectares of green asparagus.

He sells asparagus to restaurants and in regional outdoor markets. This year the harvest started just days before the first coronavirus confinement measures were put in place in France.

"We started the season with restaurants two weeks ago, and two weeks ago we lost them, from one day to the next,” he says, referring to the order by the prime minister for restaurants and non-essential businesses to close on 14 March, three days before a national lockdown mandating people stay indoors.

Outdoor markets, where De Vulpillières sells 70 per cent of his harvest, were shuttered a week later.

"We took a deep breath, and we said we can't give up on this season, especially since it's a multi-year process,” he says, referring to the fact that asparagus takes three seasons to come to maturity. “We had to find a way out of the fire.”

This story was produced for the Spotlight on France podcast:

Last week the government encouraged supermarkets to source their fruits and vegetables from France, to support farmers who saw their distribution channels close down overnight.

Du Vulpillières said he started getting calls from purchasing managers.

"We've been growing asparagus for 25 years, and we have never before been contacted by local supermarkets. Now, from one day to the next, we are getting calls constantly,” he says, adding that some have made reasonable offers, but many have proposed absurdly low prices.

"One supermarket director offered between two and three euros a kilo, which is three times less than our production costs,” he says, exasperated.

He has decided to forgo selling asparagus to supermarkets. Instead he has spent the last ten days finding ways to sell directly to customers. Already in normal times, his farm has a small shop, the Cueillette Laverons, where customers can come and buy asparagus.

Now, he has teamed up with neighbouring farmers to offer customers a selection of fruits and vegetables from around the region—including his asparagus—that they can order ahead of time and come pick up at designated times.

This has taken a lot of work to put in place the logistics and proper hygiene measures to interact with the public. But it's working.

"We have a lot of support amongst farmers, and from customers. People are really looking to consume local products, directly from the producers,” he says.

Asparagus season lasts through the end of May. De Vulpillières says that if he can continue to sell directly to consumers in this way, he will be able to sell his entire crop, a positive outcome from what initially seemed like an impossible situation.

The question is, will it last? After the confinement measures are lifted, will people go back to their old habits, or adopt new ways of consuming? De Vulpillières and others developing new connections with consumers hope people will have gotten a taste of the future through this crisis, and that the changes are here for good.

This story was produced for the Spotlight on France podcast. Listen here.