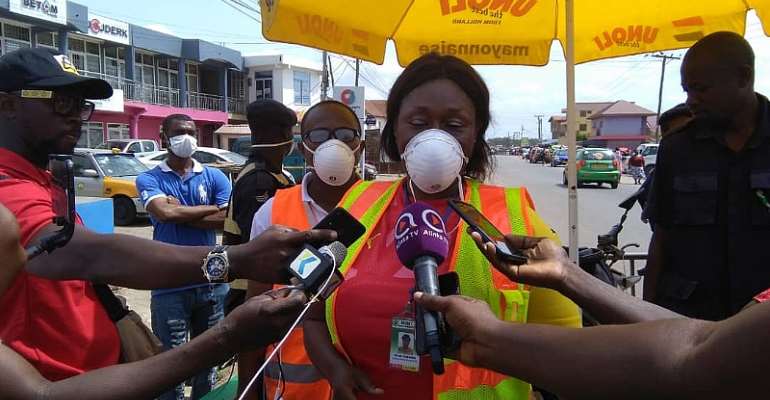 The Ga East Municipal Chief Executive, Janet Tulasi Mensah has ordered for the closure of the Dome Market over the failure of traders to adhere to the lockdown arrangements on social distancing.

She said the market should be closed from Saturday, April 4 to Monday, April 6, 2020.

According to the MCE, the closure is part of measures to prevent the spread of COVID-19 in line with the national directives.

Following the partial lockdown of Greater Accra and Greater Kumasi declared by President Nana Akufo-Addo, the Ga East Municipal Assembly held separate stakeholder-meetings, including the leadership of the various markets in the municipality, to strategize for compliance and to mitigate the attendant impact.

It was arranged that traders at the Dome Market will operate on shift bases to ensure that the market is not crowded in compliance with the social distancing protocol while the Taifa-Burkina and Abokobi markets were activated to receive traders from the Dome Market to serve residents in close proximity.

However, on Friday, 3rd April, 2020, the MCE, Janet Tulasi Mensah, after touring the Dome Market, was disheartened and enraged by the blatant abuse of the opportunity offered the traders to continue trading as the social distancing protocol was not being observed.

The leadership of the market in responding to queries by the MCE, said they had tried their possible best to mitigate the issue but to no avail.

Janet Tulasi Mensah expressed disappointment at the situation and told the media in an interview that the market would be shut until Tuesday.

She, however, stated that arrangement has been made for some of the traders to move to the Taifa-Burkina and Abokobi Markets which can accommodate about 250 and 120 traders respectively without flouting the social distancing protocol.

“From Saturday, we are closing the Dome Market. We’ve arranged for some of the traders to go to the Taifa-Burkina and Abokobi Markets where there are enough spaces to help decongest the Dome Market.” she announced.

The MCE also informed the traders and the media that Saturday and Sunday have been earmarked for clean-up exercises in all the markets while that of the streets and drains started on Friday from St. Johns through to Dome and would continue along other principal streets.