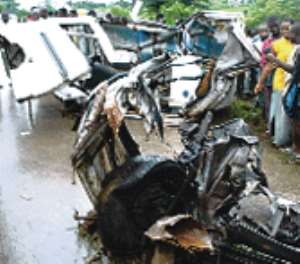 A Busload of grieving choristers and other church members on a solemn journey to mourn a deceased Reverend Father have perished in what can be the bloodiest road carnage to hit the accident-prone Kumasi-Sunyani Highway lately.

Discussions around the scene of the accident by alarmed neighbours and relatives of the deceased centred on the coincidence that the Man of God, Rev Father John Baidoo, whose funeral provided the occasion for the accident, himself died in a car crash.

The accident, which took place last Monday night, was a collision between an Inter-City STC bus and a Mercedes Benz 207 passenger bus carrying the choristers and the fatal impact left in its wake scattered bones and blood, severed limbs and heads, some other body parts mixed with the mangled vehicles.

With 35 people, comprising 17 males and 18 females, as the unfortunate victims, Monday's tragedy presented one of the most horrifying testaments of the carnage for which the Kumasi-Sunyani Highway has become so notorious of late.

It further revived last year's nightmare at Santasi in Kumasi where 17 members of the Deeper Life Bible Ministry who were on board a similar 207 passenger bus perished in similar circumstances while returning from the funeral of a colleague.

The highway, which is fast becoming a death trap, claimed 15 lives in an accident in February last year and another 28 in another accident in May last year.

It is also recalled that three prominent urologists of the Korle-Bu Teaching Hospital died in a motor accident on the Bunso-Apedwa stretch of the Accra-Kumasi Highway in August last year.

According to the Ashanti Regional Commander of the Motor Traffic and Transport Unit (MTTU) of the Police Service, Mr Augustine Gyenin, a total of 269 people were killed in road accidents in the region between January and September last year.

This year's figures, believed to be even more frightening, are still being compiled. In Monday's tragedy, the church members, most of whom were choristers, were on their way to attend the funeral of the deceased Reverend Father of the Catholic Parish at Akwaboa, about five kilometres away, when the accident occurred.

Among the dead were the drivers of the two vehicles and an officer of the Customs, Excise and Preventive Service (CEPS) who was on board the STC bus.

Relatives, church members and friends tried to identify the bodies of their departed ones as the bodies were lined up at the Komfo Anokye Teaching Hospital (KATH) mortuary and the scene was an emotional outpour of grief and tears.

Some of the bodies were badly mutilated, compelling people to wail uncontrollably. The Accra-bound Inter-City STC bus, with registration number GW 8396 U, was said to be travelling from Burkina Faso.

Monday's accident was said to have occurred a few minutes after 10.00 p.m. when the driver of the 207 bus attempted to overtake a Tico taxi cab.

Eyewitnesses said the 207 driver lost control and went into a head-on collision with the oncoming Inter-City STC bus.

The STC bus dragged the 207 bus for some distance, killing all on board.

Some of the church members told the Daily Graphic that the Abuakwa Parish of the Catholic Church selected the choir members from various societies within the parish and that the vehicle moved from society to society to pick them for the wake.

Police sources said they suspected the 207 bus was overloaded. Fire Service men who responded quickly to the accident spent the whole night trying to cut through the wreckage to remove both the dead and injured persons.

The number of injured persons who were rushed to the Intensive Care Unit (ICU) of KATH could not readily be ascertained, as hospital staff were busy trying to save lives.

But the driver of the STC bus was said to be included.
The badly mutilated bodies of the deceased have since been deposited at the KATH morgue for autopsy.

When the Daily Graphic visited the KATH morgue yesterday morning, it was a horrific scene as a large crowd had besieged the premises trying to help identify the deceased.

The Member of Parliament (MP) for Atwima Nwabiagya, Mr Benito Bioh, within whose constituency the accident occurred, was at the morgue to show concern for the lost souls and the bereaved families.