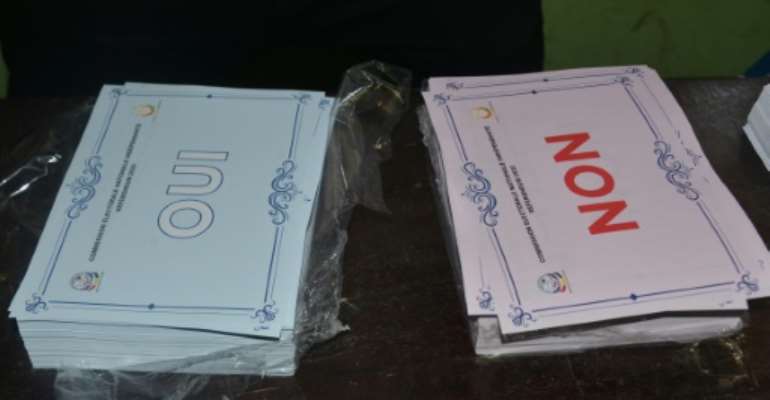 Guinea's constitutional court ratified the result of the West African state's contested constitutional referendum on Friday, recording a slightly reduced majority for the vote to approve the reforms than previously reported.

Changing the constitution has proved a hugely controversial proposal in Guinea, spurring mass demonstrations in which at last 32 people have been killed, according to an AFP tally.

Observers also recorded several deaths in election-related unrest on and around polling day, on March 22.

The government argues that the new constitution will codify progressive changes -- especially for women -- but critics fear it is a ploy for extending President Alpha Conde's time in office.

Last week, Guinea's Independent National Electoral Commission announced that 91.59 percent of ballots were cast in favour of adopting the new constitution, while 8.41 percent were against.

Cheick Fantamady Conde, the court's secretary general, told AFP the discrepancy was due to "irregularities and malfunctions noted by the observation missions" conducted by court officials, without offering further details.

The United States and France, the Guinea's former colonial ruler, have also both cast doubt the credibility of the referendum, and a concurrent parliamentary election.

The new constitution will limit presidential terms to two but extend the length of the term to six years.

But the opposition fears it would also reset presidential terms to zero. This would potentially enable Conde, 82, to govern for another 12 years when his second and final term ends this year.

An opposition figure jailed under former hardline regimes, Conde made history in 2010 as the first democratically-elected president in a country with a history of military coups and turmoil.

Voters returned him to power in 2015 for his second and final five-year term under the current constitution, but critics say he has become increasingly authoritarian.

Spiritual marriage and family covenant, bane of marriages — ...
1 hour ago