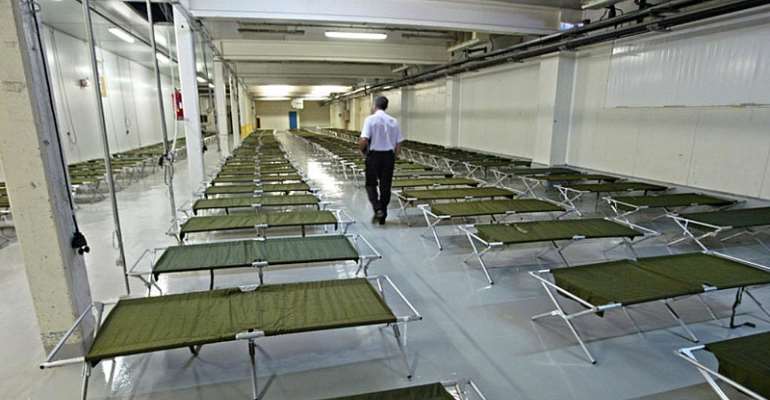 Hearses began to arrive on Friday afternoon at Rungis market, just south of Paris, where one of its giant warehouses has been outfitted to store the bodies of patients who have died from complications linked to coronavirus.

The Ile de France, region which includes Paris now has the most victims from the coronavirus – roughly a third of the national death toll which stands at 4,503. Over 6,000 patients are in intensive care at present.

The huge refrigerated hall at the Rungis wholesale food market, requisitioned by the government and run by a funeral service, has hundreds of camp beds lined up, a space accomodating up to 1,000 coffins.

The prefecture of police in Paris stated that this solution was the best way to hygenically store bodies, in a dignified way under the circumstances.

As of Monday 6 April, a special area will be set up where families can come and send off their loved ones, before they are transported to cemeteries or crematoriums.

A similar scenario emerged in 2003 during the massive heatwave when hundreds of mostly elderly people died and hospitals were overwhelmed. Some 200 bodies were kept in similar conditions in a warehouse at Rungis at that time.

French hospitals feel strain
Hospitals around France are experiencing difficulties to deal with the number of deaths from the virus, and some have even turned to hiring refrigerated shipping containers placed in parking lots to store bodies until they can be transported away to funeral homes.

The Haut-Rhin department, in the east of France, and one of the first major clusters of the epidemic, saw a 38 percent increase in the number of deaths compared to last year.

To help hospitals in the area manage the rise in deaths, ten refrigerated storage areas at the central morgue have been set aside.

Medical trains to evacuate patients
Meanwhile, two trains kitted out with medical equipment will arrive in Brittany on Sunday, transporting a number of Covid-19 patients from Ile de France to ease the strain on hospital and funeral services.

On Wednesday, 36 patients were transported by to Rennes, Saint-Brieuc and Brest.

Elsewhere in Europe, ice skating rinks have been transformed into morgues.

Planet Ice in Milton Keynes in the UK has been ear-marked for funeral directors to cope with the rise in coronavirus-related deaths.

While, in Madrid a major ice rink, the Palacio de Hielo (Ice Palace), is already in use at a temporary morgue.

Shatta Wale to spend another night in police cell; to face c...
21 minutes ago