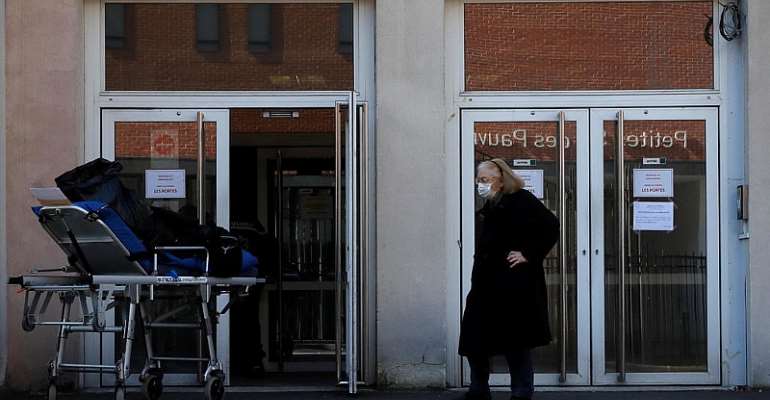 French health officials have announced that at least 884 people have died in retirement homes since the start of the coronavirus outbreak. However, lockdown measures to limit the spread of the illness have raised concerns about residents' well being and mental health.

The tally came just hours after four care homes announced that their initial death toll for coronavirus victims had gone up and many health officials suspect the government's figures could climb also.

It is the first time that official figures for non-hospital deaths have been recorded.

France's Director General of Health Jérôme Salomon said Thursday that at least 884 people had died in the country's care homes for elderly, known as Ehpad (Établissement d'hébergement pour personnes âgées dépendantes), all the while stressing this was an initial figure.

France's previous daily coronavirus death tolls had included only those who had died in hospitals, but it was known that the nursing homes, particularly in the east of the country, had been hard hit by the outbreak of the virus.

However, critics point out that patients were dying even before Covid-19.

"An epidemiological study was never conducted beforehand, so it's hard to know precisely what killed patients," explains Aubry.

Prevention worse than disease
Following a wave of infections in mid-March, the government introduced measures to sequester residents to protect them from the fast-spreading disease, including a ban on visits.

Some families have criticized this move, worried about the impact of isolation on their loved ones.

"Many people in these retirement homes suffer from dementia and other forms of mental illness. They may not understand why they're being cut off from their loved ones," says Aubry.

Retirement homes have tried to limit the risk of infections by stopping people who appear healthy from coming into contact with elderly residents.

As the rate of infections and deaths in France have soared, with the death toll now totaling over 4,500, authorities have tightened lockdown measures in retirement homes, cordoning off coronavirus patients from other residents, and urging them to remain in their rooms.

"It makes sense from a public health point of view, but you have to be careful not to lock people up," warns Aubry, whose ethics committee issued a response to the health ministry to ensure coronavirus prevention does not become worse than the disease itself.

"Confinement leads to isolation, which in turn leads to imprisonment. This could be driving the rate of deaths," he suggests.

The coronavirus is a double-whammy, not just for vulnerable elderly residents, but already-stretched staff, putting heavy pressure on their operations, which could cause neglect.

Borderline
"What we see on the ground is that when you compound the impact of isolation with the fact that some retirement homes are plagued by staff shortages, because some care workers are sick themselves, the outcome is that patients lack the basic care they need," comments Aubry.

This basic care involves feeding residents, talking with them, stimulating their mental faculties. "At the moment, in some establishments, we are at the very limit."

If the situation deteriorates, Aubry reckons retirement homes will have to call upon retired staff to meet the personnel shortfall but also on volunteers.

Unions have called for adequate equipment, including masks, gowns and eye gear for health care professionals to fight the coronavirus.

But, safety is not the only issue.
"Any volunteer entering a nursing home needs not only decent equipment but decent training," insists Aubry.

"I think there is a real sense of urgency. We need to start anticipating now how to fill retirement homes with adequate staff numbers. Anything below standard will lead to neglect."

Right balance
Aubry's National Ethical Consultative Committee was contacted by Health Minister Olivier Véran last month for advice. The group recommends that any government measures taken be weighed up against the public's interest and the reality inside retirement homes.

"Not all of them are the same. Some are big with a lot of staff, and others are smaller," explains Aubry.

Getting the balance right will be crucial.
"I think that in a democratic society such as ours, the elderly, who are the most vulnerable members, must be accorded the respect they deserve," he said.