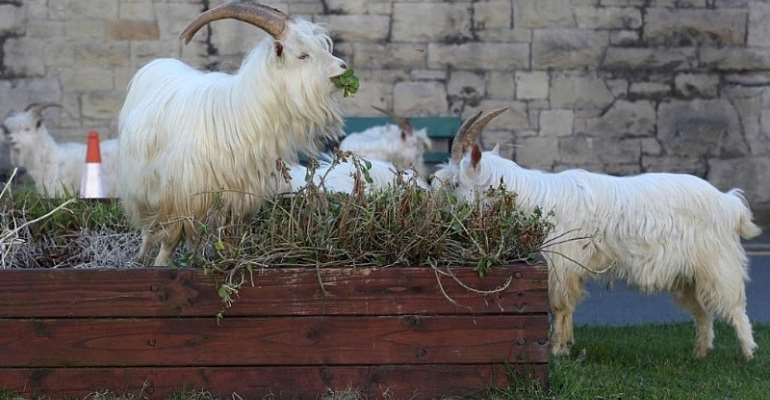 As more countries ask their human populations to stay at home to limit the spread of coronavirus, wild animals have been spotted exploring the empty streets of some of the world's largest urban areas.

It has already been widelyb reported that  that with billions of people around the planet now confined to their homes, animals are starting to reclaim some of the areas that they once owned.

Last week film footage of a civet cat roaming the deserted streets of Kozhikode in the Indian State of Kerala went viral on social media, while a puma turned up in the centre of the Chilean capital Santiago, a city which is under curfew.

Ghost, goat town
However, closer to France and it the slightly less exotic location of Llandudno, a small town located on the west coast of Wales in the United Kingdom, an unlikely herd of goats have taken over.

According to reports  from the Reuters news agency , the Kashmir  goats have invaded the Welsh seaside resort after the coronavirus lockdown left the streets deserted.

The animals, which normally live about the village on a headland jutting out into the Irish sea,  moved into the village about a week ago where, according to the reports, they have spent their days feasting on the flowers and hedgerows inn gardens around the town.

Like everywhere else, the authorities in Wales have asked people to stay at home and practice social distancing, advising them not to to travel unless absolutely necessary. The result is that goats are free to roam where they want without any human interference.

Town councillor Carol Marubbi  told Reuters that goats didn't normally come into town unless the weather was awful, but on this occasion she said they probably realized something unusual was going on because there were so few people around.

“I think they're probably feeling a bit lonely and they have come down to have a look around,” she told Reuters by telephone.

Kashmir goats have lived on the Great Orme promontory near Llandudno since the days of Queen Victoria, when the species became popular in Britain due to a fashion for shawls made from their soft cashmere wool.

Marubbi said the herd of about 150 goats, some of whom had kids in February, were a well-known local attraction and most residents did not mind having their hedges nibbled by them.

“I'm a big fan,” she said. “I love them because they are characters.”

Urban animals
Earlier last week, it emerged that in Europe, wild boar have descended from the hills around the Catalan city of Barcelona, while ducks were seen walking quietly near the Comédie Française theatre in central Paris.

In the Mediterranean, dolphins have reappeared in several ports. Emboldened wildlife has returned "to wander our cities and towns", according to Romain Julliard, head of research at the French Natural History Museum.