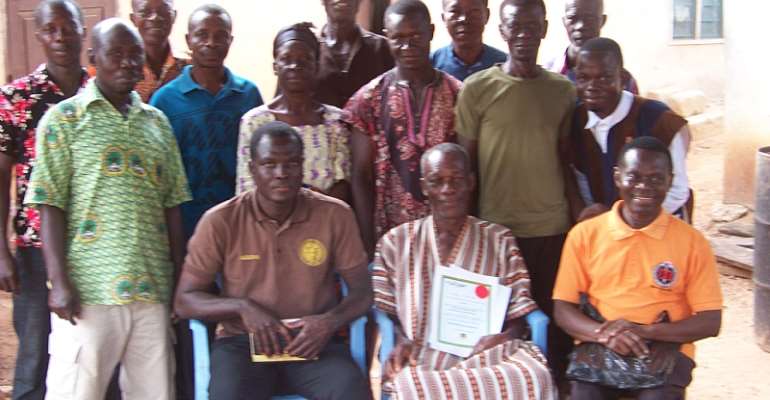 As part of the Ghana Cocoa Board’s (COCOBOD) mandate to help Cocoa Farmers and encouraged farmers in various cocoa-growing communities in the country to come together as a vibrant community- based Cocoa Farmers Cooperatives. This, according to COCOBOD will help the farmers to access agro-inputs and other facilities from COCOBOD directly.

The Cooperatives will also be nurtured to take over Productivity Enhancement Programmes (PEPS) such as pruning, hand pollination, fertilizer application, and mass spraying that is undertaken by the Cocoa Health and Extension Division (CHED) of COCOBOD.

In line with the above direction, farmers in three communities, namely, Nkonya Wurupong, Nkonya Ahenkro, and Nkonya Asakyiri in the Biakoye District of the Oti Region in separate ceremonies yesterday, 02/04/2020 received their certificates to operate as a community-based Cocoa Farmer Cooperatives from the Department of Cooperatives of Ghana.

Due to the ban on large gatherings in the country, the certificates were presented to only the executives in a short ceremony. Delivering the certificates together with the bye-laws, the Cooperative Director for Kpando Municipal, Mr. John Vovor, admonished the newly fletched Cooperatives to remain resolute and unified to ensure that the vision they have set for themselves comes to fruition.

He stated that “there are laws governing you, and a copy has been added to your certificate to guide your operations”. He advised the three Cooperative Groups to establish group Cocoa Farms, to serve as a source of finance for the Cooperative.

The Technical Officer in Charge of Extension for the area, Mr. Francis M. Eshun, stated that he is very happy with the response of farmers since he started working in the area. He pledged his maximum support for all the three cooperatives and encouraged them that, “this is the beginning of a great thing to happen” and that, Nkonya should continue to make Ghana proud in Cocoa Farming.

He expressed optimism that, the Cooperative will make extension delivery effective in the area, and added, “you now have the opportunity to access many facilities from COCOBOD to help boost their farming work and better their lives and that of the family”.

The District Extension Coordinator, for Hohoe-Kpeve District, Mr. Derrick Donkor was happy with the “united front” expressed by the farmers in Nkonya and promised to use his office to ensure that their various concerns are addressed when it gets to his table.

The Chairmen of the Cooperatives thanked COCOBOD and the Extension Officer in the area and the Department of Cooperatives for the honour done them and promised to work harder to make Nkonya, a leading Cocoa Producing area in the country. They further appealed to all stakeholders to come and support them when they call on them.

Anti-gay bill : Tell foreign missions if they provoke us we'...
32 minutes ago