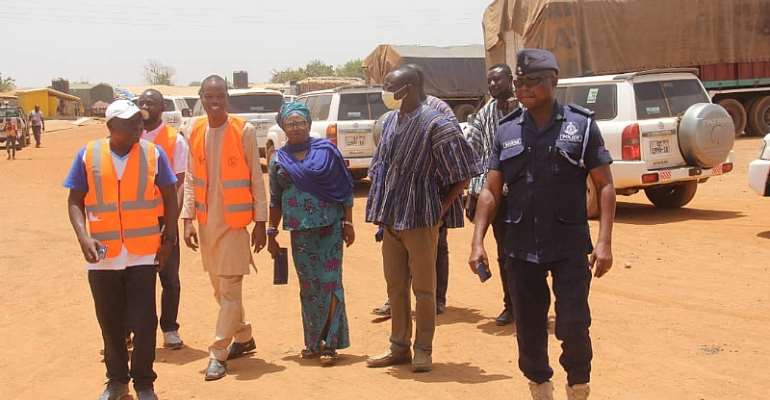 Some six Municipal and District Chief Executives of the Bawku, Zebilla, Pusiga, Garu and Tempane in the Upper East Region on Saturday visited all approved and unapproved routes in the Bawku and Garu areas to have first hand information in regards to combating the coronavirus.

This is to enable them block all the loopholes against other foreigners from sneaking in through the unapproved routes.

Their first point of call was at Pulmakom in the Pusiga district where the MDCEs interacted with the border officials including the immigration officers, port health officers and customs officials.

Speaking on behalf of the border officials, Assist. Superintendent Ibrahim Bawa said, there are so many unapproved routes in the Garu, Tempane and the Pusiga.

He indicated that there are no logistics to patrol all the unapproved routes to block illegal entrants.

Ibrahim added that many at times their officers find it difficult to act when they see travellers crossing the unapproved routes on motorbikes.

He said the only motorbike for Pulmakom border has been faulty rendering their efforts difficult to protect the borders.

At Kulungungu border post, the story was not different, Supt. Kwabena Adjei, officer incharge of the immigration, also mentioned the lack of logistics to fight the coronavirus which includes the personal protective equipment (PPEs), nose masks, infrared thermometers and others.

Supt. Adjei called on government to come to their aid to assist the officers with motorbikes to fight against the deadly coronavirus.

At Mognori border in the Bawku municipality, officers were seen armed whiles directing travellers to the port health officers for checking.

Madam Faustina Akunaba, a Senior Port Health officer at the border said since the outbreak of the virus, her station had not recorded any suspected case and that she was prepared to confine any case and report to the hospital in Bawku for further investigations.

She disclosed that the infrared thermometer they use at the border was borrowed.

She appealed for a permanent thermometer for the station to help fight the outbreak of the virus.

At Sapelliga and Kubougo, both unapproved routes in the Bawku West district, the Ghana immigration officer, Superintendent David Aseidu Addo said their men lack the logistical support to help fight the virus called on the appropriate authorities to assist them.

District Chief Executive for Garu and leader of the team, Emmanuel Asore Avoka commended the border officials for their surveillance at the borders and assured them that government will immediately consider their proposals and address their logistical constraints.

Spectacular and Elusive Bird Rediscovered in Atewa Forest
6 minutes ago