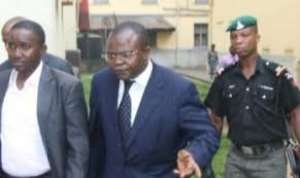 A recent post on the Facebook group of the Due Process Advocate - DPA reminded me of the fact that the founder of DPA, Chukwuemeka Ephraim Ugwuonye is still languishing in Kuje Correctional Center, Abuja, where he is remanded, following his alleged involvement in the murder of an Abuja business woman, Charity Aiyedogbon, also known as Chacha.

Ugwuonye was remanded on the 26th of November, 2018. By my calculation, 31st of March 2020 made it exactly Four Hundred and Ninety One (491) days that he has been in the Prison, and still counting.

The same Facebook post, by DPA Administrator, with the username DPA Rambo reads in part: “we have been in constant touch with the prisons. The DPA Founder is ok….”

I became even more emotional, when my attention was drawn to a Letter authored by Mr. Ugwuonye, addressed to the presiding Judge in his murder case, wherein he used Kuje Prisons as his address. But, why is the ‘Harvard-trained’ lawyer of over thirty (30) years still in detention?

On the 23rd of March, 2020, Ugwuonye’s matter came up at a Federal Capital Territory High Court, Abuja. At the resumed hearing, Mr. Ugwuonye filed another Application for bail.

In the bail application, being the third in the series, since his arraignment in 2018, Ugwuonye submitted that he has been in prison for over a year, blaming what he described as “extraordinary delay” in prosecution for the third bail application.

He further argued that the first Prosecution Witness (PW1), in the course of cross examination never mentioned his name as one of those that murdered the deceased, but however admitted that he was mentioned as an eye witness in the commission of the crime.

While we await the arguments on the Application on the 7th and 12th of May, 2020, as well as the decision of the Judge on the matter, one wonders how someone, who, through his posts and narratives on Facebook gave a vivid account of how the deceased was murdered, even before the eventual arrest and confession of the other accused persons, who corroborated his account would make such a claim. By the way, what really does an eye witness account mean?

Independent investigations revealed that since the commencement of the trial, Mr. Ugwuonye has filed four different applications. Three were for bail, while one was for the Court to allow him sack his lawyers and defend himself in his trial. The four applications may have taken no fewer than seven months of the over one year that the matter has lasted in Court. More so, where, in the history of Nigeria has a case of culpable homicide been determined in one year?

As at today, Ugwuonye has not filed any defense whatsoever in his ongoing murder trial. Not even a page of defense has been filed before the Court.

Recall that an Abuja High Court had on Wednesday, 30th January, 2019, denied Ugwuonye bail in the case of his alleged involvement in the murder of late Charity Aiyedogbon.

Opposing his bail application earlier, Head of Legal Department at the FCT Police Command, James Idachaba described Mr. Ugwuonye as “an unrepentant offender and a contemnor, capable of jumping bail and interfering with the trial”, if granted bail.

Idachaba tendered Certified True Copies of Facebook posts made by Mr. Ugwuonye, describing them as prejudicial, arguing that “If he could do this while in custody, he will do more if released on bail.”

FCT High Court 33, Gudu, Abuja, presided over by Hon. Justice Modupe Osho-Adebiyi therefore refused to grant the application for bail filed by Ugwuonye, ordering that he remains in Prison custody. Ugwuonye is yet to appeal the ruling of the trial Court, but chose to file fresh applications before the same court for bail.

Prior to his present ordeal, Ugwuonye was a regular visitor and detainee at the Force Headquarters, Abuja and even the Federal Capital Territory command of the Police. Describing him as a customer to the Police would not have been out of place.

Emeka Ugwuonye was charged before a High Court in Abuja, alongside four others over their alleged involvement in the dastard killing of an Abuja business woman, Charity Aiyedogbon.

“That you, Ezeugwu Paul Chukwujekwu, Adogah Emmanuel and Ephraim Emeka Ugwuonye all ‘M’ on or about 9/05/2016 in Kagini, Abuja within the jurisdiction of this Honourable Court did commit illegal act to wit: Armed Robbery when you armed yourselves with cutlasses and other offensive weapons, attacked and robbed Mrs. Charity Chidiebere Aiyedogbon ‘F’ (now late) of her Acura ZDX Jeep with registration number RSH 225 AH Abuja gray colour, one Samsung Galaxy phone, one Itel 1408 phone, one Iphone and Ipad and other valuables….”

The Charge Sheet reads in part:
“Extortion by threat of accusation of an offense punishable by death, Injurious falsehood against the Nigerian Police, Injurious falsehood against David Aiyedogbon, Giving false information with the intent to mislead public servants, Obstruction Public Servant in the discharge of his functions, abusive language against the Nigerian Police Force, Influencing cause of Justice and Inciting Public disturbance.”

It all started in 2016, following the mysterious disappearance of an Abuja-based business woman, Charity Aiyedogbon.

Ugwuonye had claimed in the exhibits tendered before the courts, to have overwhelming evidence that the missing woman, Charity Aiyedogbon was dead, and that she was killed by her estranged husband, David Aiyedogbon. He is yet to tender any evidence in support of his claims.

In all of these, Ugwuonye has not tendered any evidence whatsoever, both to the Police and the Court. He has also not filed any defense in the cases preferred against him in the different courts.

In my previous articles on this subject, I raised critical questions, still yearning for answers. First, he (Ugwuonye) claimed to have been in the United States as at the time of Chacha’s disappearance and only came into Nigeria in June, 2016, after being ‘briefed’ to handle the matter, but his call log betrayed him, showing that he was in Abuja on the 10th, 11th and 12th of May, 2016- same time Chacha is said to have gone missing.

Again, his relationship with the principal accused- Chukwujekwu Ezeugo, popularly known Jekwu remains suspicious. He is suspected to have aided his initial escape, as, according to Police sources, the day he (Jekwu) was to be arrested, Ugwuonye personally called the Police, promising to produce him, only to revert 24hours later, telling the Police that he had escaped. Police investigations may have established the link.

More so, Ugwuonye had displayed a dismembered body earlier, saying, with absolute confidence that it was that of the late Chacha (prior to Police investigations). Has Police investigation unraveled this? Certainly, they did not charge him to court for nothing.

Meanwhile, till date, Emeka Ugwuonye has not substantiated any of his claims; not even a bit of his “overwhelming evidence” has been tendered. This is certainly, how not to be a Lawyer!

The law is clear: he that asserts must prove. Provide the overwhelming evidence now!