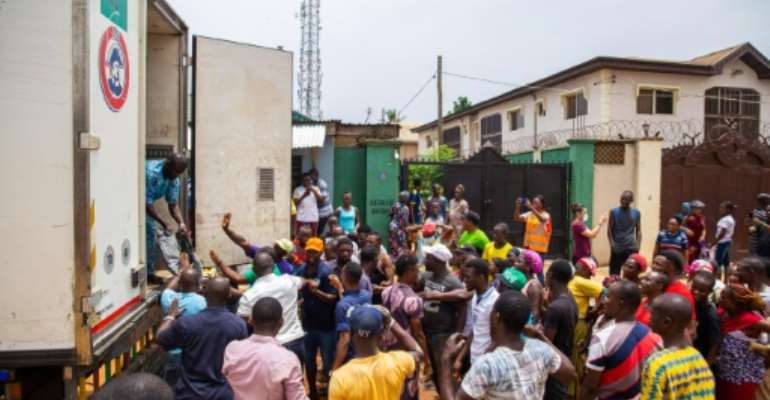 The government has promised to distribute food to the poor in Lagos to see them through the lockdown, but the challenge is huge. By Benson IBEABUCHI (AFP)

A large crowd jostled and cheered in the poor district of Alimosho in Nigeria's megacity Lagos as the doors of a lorry swung open to reveal hundreds of sacks of food.

The rice, beans and other staples were part of a programme from the local authorities to feed some of the poorest in economic hub of 20 million after it went into lockdown this week to halt the coronavirus.

But the joy of the local residents soon turned to anger as the realisation dawned that there would not be enough for everyone.

"Liars!" shouted a woman with a child tied on her back.

Only 50 sacks of food were unloaded and handed over to a local traditional leader to dole out before the truck closed up and headed off to make its next delivery.

The stay-at-home order issued by President Muhammadu Buhari from Monday has cut countless people who live hand-to-mouth in the city off from their only source of survival.

The handout initiative from the Lagos state government aims to provide rations to an initial 200,000 households to last them through the two-week shutdown.

But the 1.2 million people that represents is just a drop in the ocean of the hungry mouths left to feed across a sprawling city where poverty is rife.

"So there must be a way of palliating the economic challenges during the lockdown."

By day three of the closures, it was clear that the draconian measures to halt the global pandemic were already making many desperate.

A crowd of hundreds shook the gate of the local traditional ruler's headquarters in Alimosho, threatening to break the chains.

"They want us to kill each other, or what? It is very risky to come and give 50 bags of food like that," complained Abiola Okudukun, a young hairdresser with five children to feed

Food aid at a Lagos warehouse. By Benson IBEABUCHI (AFP)

"Obviously we will have nothing -- as usual they will leave us starving to death."

An irate Akandi Kausara, who usually sells food and water by the side of the road, insisted the situation needed to change.

"They provoke us, if that's how it is, we're going to go back to work tomorrow, you believe that," said the woman in her fifties.

Nigeria's president admitted the decision to shutter shops and businesses would "cause much hardship and inconvenience to many citizens".

But he insisted it was a "matter of life and death" as Africa's most populous country scrambles to contain a virus that has infected 174 confirmed cases and killed two.

The federal government has promised welfare payments worth some $13 (12 euros) a month will be paid in advance to those who have been receiving them.

However it lacks the financial firepower of richer nations that have unleashed unprecedented rescue packages to pay wages and prop up economies.

The collapse in the price of oil has gutted state revenues for the continent's biggest oil producer and officials are cutting back the budget.

Many people in Lagos survive by hawking or doing manual labour, and the order to stay at home has crippled their income. By Benson IBEABUCHI (AFP)

They face a tough balancing act: how to contain a pandemic that risks flooding Nigeria's weak health system and keep a lid on the wrath of millions of poor unable to make ends meet.

Signs of a potential explosion are already bubbling under the surface.

A task force of unarmed security officers toured the crowded district of Agege on Tuesday evening trying to enforce the lockdown.

They cleared prostitutes and their clients out of a brothel before turning to a mosque where hundreds had gathered in contravention of the rules.

But in a few minutes, thousands of young people emerged from the adjoining alleyway to stop them -- hurling bottles at the police cars as they fled.

"The frustration and anger are there," one officer told AFP.

"At the slightest spark, it can degenerate. So imagine in a few days, when they are really hungry."