Who Are the Masterminds Behind the Fake Military Brutalities Videos? 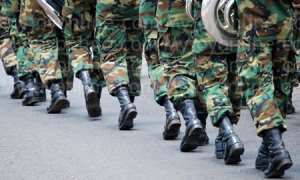 The caption of this column is rather too long and artistically amateurish like many of the captions crafted by some of the self-styled professionally untutored reporters and columnists on social media. But, paradoxically, I also found my original caption to be rather too sensational and a turnoff. It was simply “Blame John Mahama and Sammy Gyamfi,” which, by the way, would have much better captured the contents of this column. For, really, the contents of the Ghanaweb.com news story captioned “Lockdown Video: Ghana Armed Forces Cover Up for Soldiers Involved in Brutalities” (4/1/20), perfectly fit the political profiles of Candidate John Dramani Mahama, the immediate-past President of Ghana, and that of Mr. Samuel “Sammy” Gyamfi, the so-called National Communications Officer of the country’s main opposition National Democratic Congress (NDC).

Indeed, the first picture that flashed across my mind’s eye upon devouring the at once juicy and crappy contents of the afore-referenced news item, as Nigerian newscasters and anchors were wont to say in much of the 1980s and, I presume, throughout much of the 1990s, as well, was that of the seismically trounced President Mahama at a press conference that the latter hosted for the consumption of the locally resident foreign diplomatic corps at the very beginning of the tenure of Nana Addo Dankwa Akufo-Addo, at which the most administratively incompetent postcolonial Ghanaian leader, in the evergreen words of Chairman Jerry John Rawlings, meanly sought to portray the man who had witheringly defeated him at the polls as a brutal autocrat, perhaps in the mold of Mr. Mahama’s own political mentor and archnemesis; for, make absolutely no mistake, there is no love lost between the infamous Trokosi Nationalist Generalissimo and his younger Bole-Bamboi-born mirror image.

Some of the details escape me now, but in a widely broadcast videoclip which the former Arch-Lieutenant of the late President John Evans Atta-Mills “power-pointed” to some locally resident members of the diplomatic corps, at the famous Presidential Resort of Peduase Lodge, near Aburi, on the Akuapem Hills, some personnel of the Ghana Police Service (GPS) could be seen brutally slamming some helpless civilians with their nightsticks or truncheons. The audience would be told by the former President that these cops – in New York City vernacular or New Yorkese – had been deliberately sicced by a fast and increasingly intolerant Nana Akufo-Addo on some bona fide operatives of the country’s main opposition National Democratic Congress. Mr. Mahama would shortly be globally exposed for the veritable political charlatan that he was and still is. It would turn out that Mr. Mahama’s videoclip presentation actually entailed the composite splicing of several disparate incidents of apparent police brutality that had been deliberately and strategically taken out of context with an obvious view to making a newly elected President Akufo-Addo appear to be grossly unqualified for the highest and most sensitive elective position of the land.

In that incident, the quondam Rawlings’ Communications Minister, caught with his pants down and his muck-splattered butts in full media glare, would simply tuck his two arms in-between his legs and scamper away sheepishly with the grin of a preteen schoolboy caught stealing quarters and pesewas from his mother’s cookie jar. To the best of my knowledge, the man who has been kicking and screaming as if the Presidency was his patrimony has never once apologized for staging this patently slanderous act of political criminality. Fortunately, or unfortunately for the culprit, the event observed above has fast become fuzzy in my mnemonic bank with time. The fake, spliced up Kumasi videoclip also reminded me of a rat-racing position-jockeying Sammy Gyamfi standing in front of one of the hulking Mahama-sponsored so-called E-Block Senior High School physical plant facilities or buildings in one of the Denkyira districts, in the Central Region, and maliciously claiming that President Akufo-Addo had deliberately turned his back on this supposedly high-minded Mahama project that was aimed at significantly upgrading the quality of the country’s public education system.

Well, here again, as it shortly turned out, the Mahama-sponsored E-Block facility in question woefully lacked such indispensable state-of-the-art pedagogical tools as a fiberoptic wiring system. For a high school that had supposedly been designed to house boarding students, absolutely no housemaster’s quarters had been constructed and attached to the so-called E-Block. Then also, no school bus or easily accessible public transportation means or system existed to ferry the students who were intended to use this furniture-lacking facility from the three-mile, or so, stretch between their more fully and better equipped old school site to the Mahama-constructed new one. The incident recalled here occurred right on the heels of the grisly slaying of Captain Mahama – posthumously promoted to the military rank of a Major – clearly as if to insinuate that President Akufo-Addo was to blame for the barbaric slaying of the Mahama nephew.

We also saw Sammy Gyamfi make a shameless clown of himself in the wake of the globally infamous kidnapping of the three young Canadian white women NGO volunteers in Kumasi, the Asante Regional Capital, when the NDC’s Communications Officer hastily called a press conference to supposedly expose the Akufo-Addo-led government of the New Patriotic Party for having allegedly masterminded this most shameful act of human depravity. Here also, it would shortly turn out that, in fact, the chief mastermind of the Kumasi Kidnapping Scandal had actually been publicly honored and commended at a ceremony which former President Mahama either personally hosted or at which he was the keynote speaker.

Don’t get me misconstrued, Dear Reader, I am fully aware of the fact that our military personnel are absolutely not behaviorally perfect or angelic. They are, each and every one of them, prone to the same human foibles as the rest of the members of Ghanaian society. Nevertheless, I was not the least bit flabbergasted to learn about the patently false broadcast of some spliced up or deliberately doctored videotapes by some TV3 operatives, which was cavalierly passed onto the general viewing public as the rather brutal and criminally irresponsible response of detailed personnel of the Ghana Armed Forces (GAF), in the wake of President Akufo-Addo’s lockdown of all major Ghanaian cities and towns, in particular the Greater-Accra and the Greater-Kumasi metropolitan areas, in a savvy and timely response to the apocalyptically raging Coronavirus Pandemic.

I was not the least bit flabbergasted because, first of all, the Kumasi metropolis hosts the 4th Battalion of Infantry of the Ghana Armed Forces. Thus, it was highly unlikely for any troops to have been ferried some 200 miles across the land, from Accra, to enforce the President’s lockdown directive. It simply did not make both economic and strategic sense. That was when I decided that this hogwash of a breaking news event may very well have been concocted by the Mahama-managed NDC political machine. And, oh, Dear Reader, I have the following professionally imperative disclosure to make: Yours truly had the rare privilege to once have resided in the Officers’ Quarters of the Old 4 BN, located between the Komfo Anokye Teaching Hospital (KATH) and the Danyame-Nhyaieso enclave of the Kumasi metropolis. Forty years ago, Kumasi was much smaller than it is presently, which was why it was then called the Kumasi Municipality.