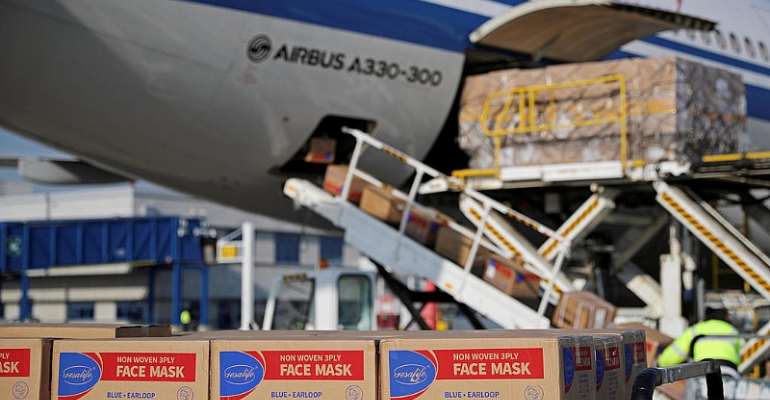 Coronavirus masks that France ordered from China were bought at the last minute by the United States as they waited to be loaded onto cargo planes, French officials have said.

"Americans pay three or four times the amount we pay, and in cash," said Jean Rottner, head of France's eastern region, one of the areas worst affected by the coronavirus outbreak, according to reports by France Info.

On Thursday, a planeload of Chinese-made face masks were bought up right on the tarmac just as the much needed protective gear was about to set off for France.

The United States, which now has the highest number of known cases of coronavirus in the world, is trying to procure any masks available, disrupting deliveries to other nations, another report by French daily Liberation indicated.

The east of France nonetheless received 2 million masks from China on Wednesday, to the delight of its president.

"I was very happy to see that airplane arriving in our region last night," Rottner said.

France has ordered more than one billion face masks, a quarter from China, as it battles the pandemic and currently has less than three weeks worth of supplies.

Mask shortage cover up
At the end of last month, French President Emmanuel Macron insisted the country needed to regain its "independence" in producing vital medical equipment, without relying excessively on imports.

Macron hopes to rebuild "national sovereignty" by the end of 2020. However, according to reports by French online investigative website Mediapart, the government knew about dwindling medical stocks as early as January.

The health ministry, aware of the limited supplies, decided to order only a small amount of masks, despite internal warnings, writes Mediapart.

The news site says the government knowingly covered up the shortage of masks for over two months, changing its health advice accordingly. Initially, the director of health insisted any person in contact with a coronavirus patient wear a mask, but as stocks began to dwindle, he made a U-turn and insisted it was no longer necessary.

The limited supplies have left health officials and those at the frontline of the crisis exposed. All eyes will be on government policy when the lockdown period comes to an end. Deputy economy minister Agnès Pannier-Runacher has admitted that the state will have to "massively equip the population," according to Mediapart.

Intense struggle
In the meantime, lower-level officials are following in Rottner's footsteps and taking the matter into their own hands. The head of the south-eastern Provence-Alpes-Côte d'Azur region Renaud Muselier told RT France that he ordered around 60 million masks but has also experienced delivery problems.

To ensure the delivery of 4 million masks by this Saturday, Muselier has opted for a different route, passing by the sea instead. "At least that way, I can be sure that no one will steal my masks from the tarmac," he said.

The United States, like France, has come under criticism for its lack of preparedness in dealing with Covid-19. However, its covert efforts to make up the shortfall of masks is also being called into question.

Muntaka Petitions EC Over Missing Names On Register
18 minutes ago