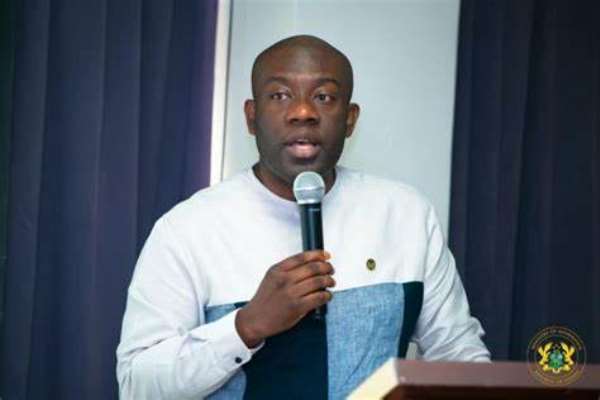 The Minister for Information, Kojo Oppong Nkrumah has said President Akufo-Addo was not tested for Coronavirus when he returned from Norway.

Mr Oppong Nkrumah on The Point of View on Citi TV explained that although rumours of the President testing positive for the virus were rife, the President was not tested because the government was strictly observing the World Health Organisation (WHO) guideline of 14-day mandatory observation.

The Minister was however quick to add that the President was recently tested as part of government's enhanced testing process which was recently introduced.

“He was not tested when he came back from Norway. A day before his birthday, that was when this enhanced testing programme started. Remember that the WHO guidelines that we were working with was the 14-day observation and we were not even doing enhanced testing at the time. At first, what we were doing was just observation. We were not doing this aggressive testing. As we have started, that is how come the President and his close associates have been tested and we will probably do it on a regular basis because they come into contact with various actors,” Mr. Oppong Nkrumah clarified.

President Akufo-Addo returned from Norway in the last week of February 2020, as part of an official visit to the Scandinavian country.

According to a statement from the presidency, the President was accompanied by the Minister for Foreign Affairs, Shirley Ayorkor Botchway, MP; Minister for Education, Dr. Matthew Opoku Prempeh, MP; and officials of the Presidency and Foreign Ministry on that trip.

When he returned, there were calls for him President Akufo-Addo, immediate family test negative for COVID-19.

In the latest development, the president's personal physician, Dr. Patrina Takyi-Ankrah, who spoke at a press briefing organised by the Ministry of Information on Wednesday said Akufo-Addo tested negative for COVID-19.

She said other top government officials including the Minister of Health, have also taken the test and have all tested negative.

“On the day before the President's birthday, we tested him and the First Lady and his daughters and all the staff of this household and I am happy to announce that all the tests came back negative,” she said.

Some news portals earlier in March reported that President Nana Akufo-Addo and the Senior Minister, Yaw Osafo Maafo had tested positive for Coronavirus.

The publications were based on a statement by a social commentator, Kelvin Ebo Taylor who said in a televised broadcast that a source at the seat of government, the Jubilee House had indicated that the President had tested positive for the virus.

She said the tests were done based on a policy that all top officials and frontline workers dealing with issues regarding COVID-19 in the country be screened themselves.

“A day after his birthday, we continued to test the people in his secretariat including myself because we tend to deal with him on these bases and as I speak now, a total of 99 people have been tested and the results have come back negative. We are continuing the process and as and when we complete, we are hoping that everybody will test negative,” she added.