Lockdown - Military “Be Gentle And Compassionate With The Poor” 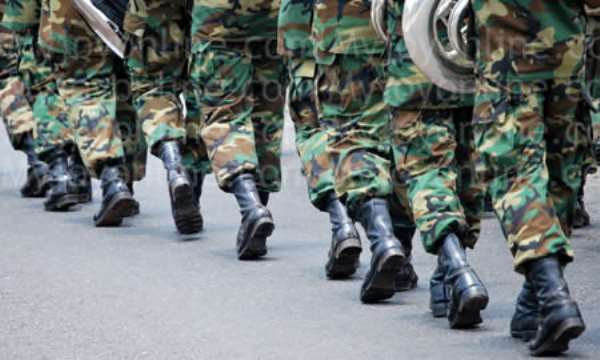 We are living in strange times, very strange times indeed. It has been reported that a group of Mexican protesters have shut a US Southern Border crossing amid fears that untested American travellers will spread coronavirus. Let me quote from the BBC Website: “Residents in Sonora a border town in Southern Mexico…………wore face masks and held signs telling Americans to stay home”. Hey, folks who would have thought a month ago that this deadly virus would create an “invisible wall” more dangerous than the” visible wall” being built by the USA to protect itself from illegal migrants.” Something is changing.

Coronavirus seems to have changed all the normal rules, laws, regulations and norms controlling our daily lives. My little world, was completely turned upside down when I was instructed by the care providers of my old mum in Manchester, United Kingdom to stay home for the next 4 weeks and care for my mum as they had staffing problems. This directive was totally out of the blue and made me realised the contagion effect of this virus.

United as One Nation

Anyway, back to my beloved country Ghana. First, we need to express our appreciation and thanks to our Government and our President His Excellency Nana Addo Dankwah Akuffo Addo for working in tandem with state institutions, the traditional authority and ordinary folks in his efforts to come to grips with this deadly pandemic.

At this critical time when almost a quarter of the world’s population is in lockdown due to the coronavirus pandemic, it is pleasing and extremely gratifying to see our country coming together as one nation

More satisfying, is the constant harping on by our traditional authority, encouraging everyone to listen and follow the advice of our Government. It is therefore encouraging to see the President of the National House of Chiefs(NHoC) adding his voice to the call for all and sundry to obey the instructions of the Central Government and leading by example.

It was heartening and unifying to listen to the advice of the President of the (NHoC) when donating Ghc100,000 and 2,200 hand sanitizers to two hospitals and communities in the Volta Region.” It must not be business as usual. Let us be each other’s keeper. Let’s show love. We have done enough politics. It’s time we come together and be each other’s keeper.” What a wonderful and unifying advice. Thanks.

Now to the effect and consequences of the deadly virus. First, His Excellency the President Nana Addo Dankwah Akuffo Addo was right to announce a lockdown in some specific areas of the country based on the advice given to him by his scientific and medical advisers. By the way the lockdown towns include my hometown of Nkawie.

My advice to my folks at Nkawie – Please stay indoors. It is also appropriate and proper that the army has been called upon to help enforce the decision of the Government- Thanks Your Excellency.

Realities on the Ground Must Determine the Actions of the Military

When I am in Ghana, I live in Zenu, - Ashiaman and I can confidently say on empirical evidence that a minority, possibly a majority of the people in Ashiaman will struggle to comply with a total lockdown if even authorised by Adolf Hitler.

The realities on the ground in some of the communities being asked to lockdown is dire and miserable.

Let us take a suburb like Ashiaman as an example. It shares the characteristics of most shanty and urban towns. For readers who do not know Ashiaman, it is a shanty town near Tema in the Greater Accra Region of Ghana.

It can be described as a melting pot of diverse cultures, ethnic groups and people of all backgrounds co-existing in the harsh reality of a metropolitan slum. Residents of Ashiaman are made up of almost all the tribes in Ghana, including some foreigners. Ashiaman is home to more than 500,000 people (officially) maybe the figure is around (700,000). The area has nonexistent good quality roads, squalid housing, poor drainage systems and brutally under resourced education and healthcare facilities.

It is well known for its notoriety and other forms of social vices. There is high unemployment, literacy, poverty and a lot of disillusioned and disaffected young men making it a fertile ground for recruiting the young into criminality. It is estimated that more than 60% of houses in Ashiaman have no running water, and many residents have no in - house public toilet facilities. These are the realities facing many communities.

How on earth are residents of Ashiaman going to ease themselves?

Where would they secure clean affordable drinking and washing water?

How are they going to stock up on foodstuffs when the average daily incomes are just sufficient for a day’s shopping?

Inevitably, one or two good decent folks may walk the thin line.

My Direct Plea to the General Officer Commanding the Ghana Armed Forces.

Lieutenant General Obed Akwa, I am fully aware that we have stubborn, church leaders, idiotic funeral contractors, gun-ho individuals and outright foolish gangsters who would try and test the will and resolve of your soldiers.

But on the whole the majority of our folks are peace loving people and deserve compassion and understanding. You must also be aware that despite the high integrity, dedication and commitment of your men/women years of military rule and some unfortunate incidents has led to some Ghanaians questioning the professionalism of the Army and tagging them as “gang leaders of brutalization”. Others see your men/women in uniform as bullies in arms.

Undoubtedly Sir, that is not the truth but it is very difficult to erase old memories from the minds of Ghanaians. Most of us who have had the privilege to be a “tommy” before knows the pride and honour of getting into that uniform.

Also, the majority of Ghanaian soldiers are fair- minded, hardworking and nationalistic. Indeed, in January this year the state of Israel named a street after the late Major General Francis Vib- Sanziri a great honour to all of us.

Sir by all means, your men/women should not spare the idiots who flagrantly disobey the rules putting the lives of the rest of community in danger?

They should not give an iota of inch to the demonized and fake pastors or the arrogant funeral directors hell bent on breaking the regulations imposed by His Excellency the President.

However, they should and must act with compassion, generosity, and kindness to our mothers, aunties, brothers and the poor folks who may genuinely fell foul of the lockdown rules.

Let us all bear in mind, that the inability of some of the slum dwellers or even town folks in Nkawie (my hometown) to obey the regulations and rules is due to the inaction of successive governments to provide welfare goods. The failure by Governments of all shades of color and opinion to invest in basic infrastructure, human resources, welfare and social goods, boreholes, in house toilets, affordable low cost housing, local transportation systems, rudimentary education facilities have created a huge infrastructural deficit in all public services provision.

This disgraceful, shameful and institutional neglect of poor rural/urban areas by successive governments have led us to this pitiable state of affairs where families have to queue for hours to use public toilets.

Most of those residing in rural and urban poverty still live in filth, squalor and degradation, daily humiliated, maltreated and dehumanize.

Conclusion- Is Coronavirus a Game Changer?

I pray to the Almighty God that maybe, just maybe, coronavirus have tipped the balance in favour of the wretched of the earth both in sub- Sahara Africa and the entire universe. Maybe, for the first time we are learning to be each other’s keeper.

First, all Governments have a moral, social and economic duty to improve the basic living standards of their citizens. CO-VID 19 is a levelling virus no respecter of status.

Sadly, the Western World have closed the shutters- Nowhere to escape.

The last and bitterest lesson of them all is “Brighten the Corner where you are”. There is a very good Akan saying “If the back of your teeth does not taste nice it is the only place that you would lick”