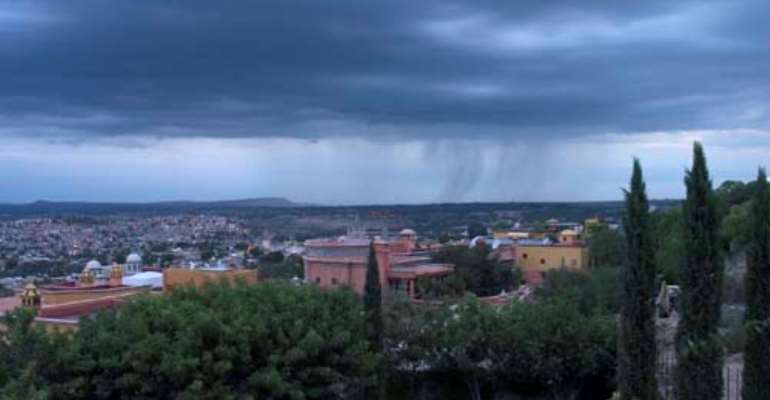 A Principal Meteorologist at the Ghana Meteorological Agency, Mr Paul Juati, has warned that residents, motorists and pedestrians should gear up for heavy rains, characterised by thunder, lightning and strong winds, which are soon to hit various parts of the country.

He indicated that the storm which hit some parts of the country last Saturday would be the pattern of rains till the latter part of this month.

Speaking to the Daily Graphic in Accra yesterday, Mr Juati said there was a lot of energy which would come with the first rains of the season, to be characterised by thunder, lightning and strong winds.

He, therefore, advised drivers and commuters to be careful and seek shelter at the onset of such storms, explaining that the strong winds which accompanied the rains last Saturday toppled some concrete and metal billboards and structures.

Mr Juati explained that the billboards were damaged because those who put them up had made the flat surface to face east or west.

“With the strong winds coming from the north-east, the position of the billboards provided the targets for the winds to push against them and pull them down,” he explained.

Mr Juati advised drivers to get to high ground, find a safe place and park whenever the rains started, since in such storms visibility was low, while all others had to stay indoors in order not to get in the way of any flying debris from the force of the winds.

He cautioned all to keep gutters cleared of silt, since the run-off from the rains could not seep into the ground, especially in the metropolitan areas which did not have much shrub and growth for water to easily seep away.

Mr Juati said for flights, the only problem would be taking off and landing at the onset of such a storm, saying that might result in delayed take-off and landings.

Last Saturday's rains, apart from uprooting some big trees, with one falling on a commercial vehicle along the road adjacent to the Social Security and National Insurance Trust (SSNIT) Pension House, also pulled down billboards with concrete bases on the main 37 Military Hospital-Airport road, near the Ghana International Airline (GIA) offices.

Billboards on the Spintex Road also suffered a similar fate. The President of the Advertisers Association of Ghana (AAG), Mr Reginald Laryea, when contacted about standards in the putting up of those billboards, was clear that under ordinary circumstances 99 per cent of billboards put up by the members of his association could withstand any normal heavy rain.

He said members of his association adhered to requirements in the construction of billboards, such as constructing the base with concrete, the stands with metal, using bolts to fix all parts firmly together, among others, and was of the opinion that last Saturday's rains were extreme and that might have caused the destruction of the structures.

Mr Laryea said members of the association also took full insurance cover for putting up the billboards and, therefore, in the case of accidents or damage to property or lives, investigations were carried out and the insurance came in to take care of the damage.

He said the AAG was striving to maintain and improve on standards already set, in the light of changing global weather patterns, which have lately tended to be extreme.

Meanwhile, the Greater Accra Regional Co-ordinator of the National Disaster Management Organisation (NADMO), Mr Ben Brown, has said his organisation has adequate shelter for victims, in case of flooding, but no food nor clothing.

He, therefore, appealed to the public to assist the organisation to stockpile food and clothing for victims of flooding when it occurred.

In an interview, Mr Brown also suggested the creation of a disaster fund for the country, since there was none in existence currently.

The fund would also be a measure to secure logistics to handle disasters. He said NADMO had currently designated some areas as shelters or safe havens where people could shelter from flooding.

These are the Ghana Water and Sewerage Training School at Weija for people near the southern part of the Densu River and the Ramsar sites or wetlands which, according to him, had been encroached upon, making them risk areas.

He said with the construction of the primary drains for the Odaw River, it was probable that residents of Alajo might have some respite this time.

However, the Tesano Police Depot and Training School would provide shelter for victims in case there was flooding.

Other areas which have been designated as safe havens are the Freedom and Justice Park, behind Mr Biggs Restaurant, for residents of Asylum Down, Odawna and those living near the Onyasi Stream, behind the Paloma Restaurant.