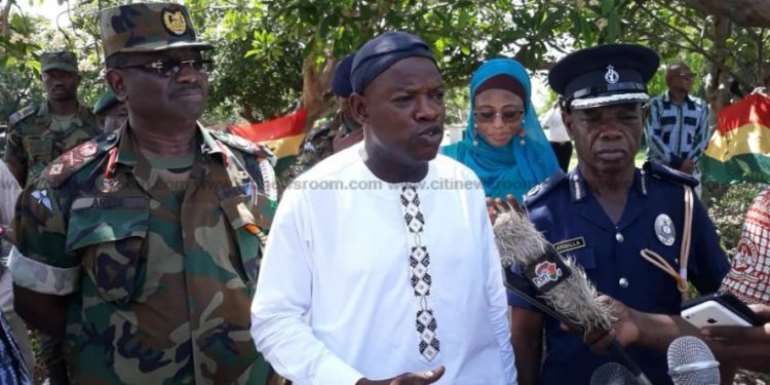 The Northern Regional Minister, Salifu Saeed says one of the COVID-19 patients in Tamale who escaped from the facility in which she was being quarantined has since not been found since Monday.

According to him, the security taskforce in the region is still on a serious manhunt for the lady.

“We are still on a manhunt for her and I have issued a directive that anybody who is hoarding that young girl should release her. Anybody who has come across the lady should make her available. She’s on the run but she can run but she can’t hide so we are still hunting for her. She did what she could do but we are also following her. Even though she escaped, it doesn’t mean there cannot be the arrest of other potential people who will violate the rules and regulations. The security is capable to take up this issue and we will get the needed results from the directive,” he noted on Eyewitness News.

One of the eight Guineans and Burkinabes who tested positive for the novel coronavirus escaped from the facility in which they are being quarantined in Tamale on Monday.

According to Mr. Saeed, the patient, a woman in her early 20s, “scaled over a wall” leaving behind her belongings.

Meanwhile, the Regional Minister also defended his decision to ban commercial sex work in the region, following the number of coronavirus cases in the region.

Still on Eyewitness News, he disclosed that most of the COVID-19 patients confirmed in his region were females and were believed to be commercial sex workers.

He insisted that he took this decision as part of efforts to observe the social distancing rule and prevent the spread of the virus, Salifu Saeed said he will see to it that the ban is enforced with the help of a security taskforce.

“It has been banned by the law but it was not being enforced so I am now going to enforce the law. Initially, I left it in the hands of the MMDCEs but it has gotten to a point where it is now above them. I now need to come in with a heavy heart. Because one of my responsibilities is to do fact-checking to the municipal district assembly. If they are implementing something and are not getting the measures or effectiveness that we need from such initiatives, it means that we the regional ministers can step in. Now that I’m the Minister, I am enforcing the ban. If it is not working, the national level will come in to support me, given the fact that we have coronavirus cases here,” he insisted.

The Northern Region currently has 10 confirmed cases of the novel coronavirus; eight of them being Guineans and the remaining two, Burkinabes.

Aside from these recorded cases, the Northern Regional Authorities have quarantined five Malians who were travelling from Kumasi to Tamale.

The five were part of 78 passengers in a Malian registered vehicle which was intercepted by security officials in the region.

According to the Regional Minister, samples of the five-persons have been taken for testing.

“Northern region is like a transit point for the Sahelian people so they travel from Niger, Mali and others. They passed here with trucks, some are from Niger, Burkina and others. Currently, there is a vehicle parked at TTA because it is a vehicle from Mali with both Malian and Nigerian nationals. The medical team is checking up for any symptoms of COVID-19,” he said while speaking to Citi News.

Some 36 staff of the Tamale Teaching Hospital have also been quarantined over a possible infection of the disease after coming into contact with two of the ten foreign nationals who have tested positive for COVID-19 in Tamale.

Your God-fearing attitude, refusal to tenaciously cling to p...
1 minute ago