Global virus cases near million as US baby dies

By Maggy Donaldson with Hazel Ward in Madrid, Dmitry Zaks in Rome and Shaun Tandon in Washington, Dmitry ZAKS 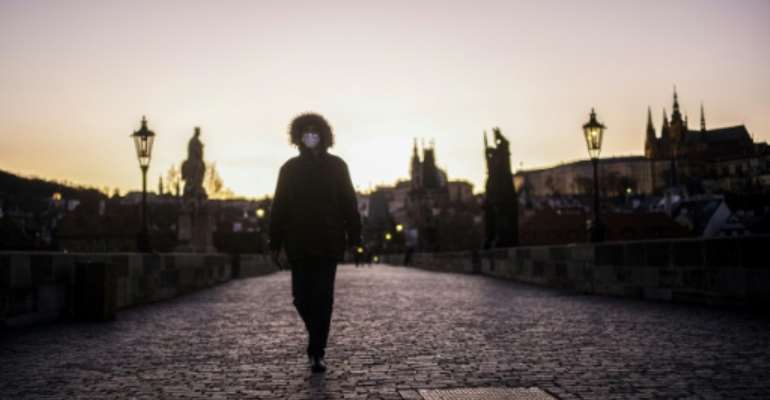 Confirmed coronavirus infections around the world approached one million Thursday as the pandemic spread at a "near-exponential" rate, with a six-week-old baby becoming one of the youngest known victims.

Half the planet is under some form of lockdown as governments struggle to tamp down a virus that has killed tens of thousands of people.

Map highlighting the countries with the largest number of daily cases/deaths of COVID-19 from March 26 - April 1 and charts showing the daily new infections/deaths over the same period.. By (AFP)

The death toll from COVID-19 continued its relentless march upwards, with more than 46,000 people known to have died worldwide.

The United States, which now accounts for almost a quarter of reported global infections, logged its 5,000th death overnight, according to a tally by Johns Hopkins University.

And, said President Donald Trump, things were going to get worse.

Family and friends bury a 13-year-old boy allegedly killed by police in Nairobi, enforcing the dusk-to-dawn curfew imposed by the Kenyan government. By LUIS TATO (AFP)

"We're going to have a couple of weeks, starting pretty much now, but especially a few days from now, that are going to be horrific," he said.

"But even in the most challenging of times, Americans do not despair. We do not give in to fear."

Among the latest US fatalities was a six-week-old baby who was taken to a Connecticut hospital late last week.

"Testing confirmed last night that the newborn was COVID-19 positive," the state's Governor Ned Lamont tweeted. "This is absolutely heartbreaking."

The new coronavirus has chiefly affected the elderly and those with pre-existing medical conditions, but a number of recent cases have highlighted that it can affect people from all walks of life.

The dead have included a 13-year-old in France, a 12-year-old in Belgium and 13-year-old Ismail Mohamed Abdullah in Britain, whose family said the "gentle and kind" boy had no underlying health issues.

The US Army Corps of Engineers builds a field hospital in Detroit, Michigan. By JEFF KOWALSKY (AFP)

"Over the past five weeks, we have witnessed a near exponential growth in the number of new cases, reaching almost every country," he said.

"The number of deaths has more than doubled in the past week. In the next few days we will reach one million confirmed cases and 50,000 deaths."

Britain and France both reported their highest daily death tolls from COVID-19 on Wednesday, although there were signs the epidemic could be peaking in Europe.

Medical personnel tend to a patient at the reception of the Emergency Room, set up in a tent, in a courtyard of the Henri Mondor Hospital in Creteil in the suburbs of Paris. By Philippe LOPEZ (AFP)

But epidemiologists said the infection rate was continuing to slow.

Fernando Simon, head of Spain's health ministry's emergency coordination unit, said it appeared the country may have passed the peak.

The US is rapidly becoming the worst hit country, with its total number of infections rising above 215,000.

Migrant workers wait on marked areas on the ground to maintain social distancing as they queue to receive food packets in Chennai, India. By Arun SANKAR (AFP)

More than three-quarters of Americans are under lockdown, including tens of thousands of prisoners, who were told Wednesday they would be confined to their cells for two weeks.

Officials also shuttered the Grand Canyon to prevent tourists gathering there and New York announced that basketball courts would be closed as the city grapples with sky-rocketing infections and a severely strained health system.

America's unwanted title as most-infected country was questioned Wednesday by a Bloomberg report, which cited US intelligence as saying China's infection rate was far worse than officially acknowledged.

More than three-quarters of Americans are under lockdown, including tens of thousands of federal prisoners. By Johannes EISELE (AFP)

Republicans, many of whom are naturally skeptical of Beijing, attacked China's numbers as "garbage propaganda".

"Without commenting on any classified information, this much is painfully obvious: The Chinese Communist Party has lied, is lying, and will continue to lie about coronavirus to protect the regime," Senator Ben Sasse said.

Having already caused the Tokyo 2020 Olympics to be postponed for a year, the pandemic on Wednesday claimed its latest sporting victim as the Wimbledon tennis tournament was shelved.

The cancellation of the world's oldest Grand Slam tournament -- for the first time since World War II -- leaves the season in disarray, with no tennis set to be played until mid-July.

But the loss of sporting events in the developed world paled in comparison with the hardships imposed on those in poorer parts of the globe, where lockdowns were threatening whole communities.

Dwellers of South Africa's townships say it is simply impossible to stay at home.

"We don't have toilets... we don't have water, so you must go out," said Irene Tsetse, 55, who shares a one-bedroom shack in Khayelitsha township with her son.

The macroeconomic impacts of such measures could be far-reaching, experts warned.

"Uncertainty about food availability can spark a wave of export restrictions, creating a shortage on the global market," they said.