With no space or water, Cape Town slum has little to face coronavirus 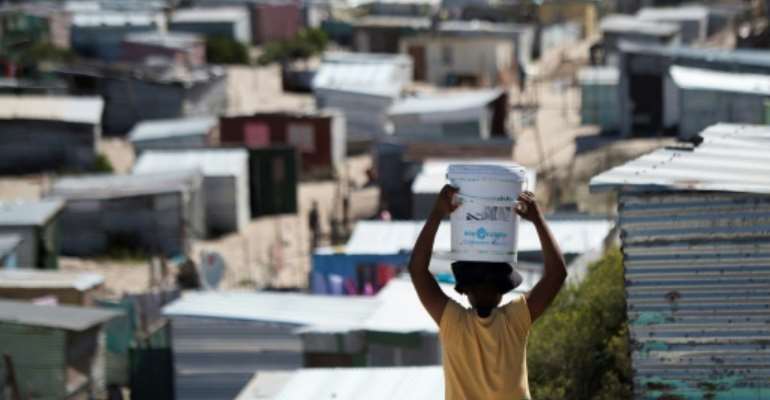 Coronavirus is starting to spread in South Safrica, but in Khayelitsha, a slum near Cape Town, even basic sanitation and running water are a dream. By RODGER BOSCH (AFP)

For the simple act of washing their hands, slum dwellers in Cape Town's Khayelitsha township have to go to a communal tap, fill up a bucket of water and haul it back to their shack.

On the way they walk past overflowing public toilets -- sewage gushing out onto the narrow alleyways of one of South Africa's biggest informal settlements.

Everyday concerns about basic sanitation have been compounded by news that a Khayelitsha resident tested positive for coronavirus late last week.

"We don't have toilets... we don't have water so you must go out," said Irene Tsetse, 55, who shares a one-bedroom shack with her son.

A woman fills a bucket from a communal tap as children play. By RODGER BOSCH (AFP)

With no windows and large rats entering the house, Tsetse explained the struggle of observing a 21-day lockdown imposed by the government last week to curb the spread of coronavirus.

"We are trying to stay in the shacks but we can't," she told AFP.

"You can't be inside the whole day in a closed dark room. You must open your door and gate and go peek outside."

Outside groups of children played on the street, desperate to escape the hot corrugated-iron cabins, each estimated to house between three and seven people.

Khayelitsha is home to at least 400,000 people, according to the latest national census in 2011.

But the sprawling township has grown rapidly over the past decade and locals estimate the population to be closer to one million.

Around 65 percent of residents live in make-shift homes with no electricity or running water.

The settlement has expanded faster than service provision, and people on the edge of the township live far from communal taps and toilets.

Lack of urban planning has made it particularly difficult to roll out sanitation facilities.

"They made no roads and there is no infrastructure," said Ndithini Tyhido, head of the Khayelitsha development forum.

Pointing at the jumble of shacks, Tyhido blamed poor spatial planning by the white-minority government during South Africa's apartheid regime, which ended in 1994.

"That sewer network can no longer cope. The drains here are literally filled with faeces."

Since South Africa's first coronavirus case was detected earlier this month, the government has deployed water trucks and distributed soap to townships like Khayelitsha.

Numbers have risen to more than 1,350 over the past three weeks and five deaths have been recorded so far, making South Africa the worst-affected country on the continent.

"We won't be going to all the townships at the same time, but we are targeting those where we want to deal with already identified cases," said Health Minister Zweli Mkhize on Tuesday.

"We are scaling up intervention," he added.

"We promote that people wash their hands and we say this everyday with full knowledge that some people don't even have the water to wash their hands," said Tyhido, exasperated by the situation.

"If someone is going to report an incidence of corona they won't be able to say, 'at house number 30' or whatever," he added.

Tyhido assured that Khayelitsha residents were doing their best to follow lockdown regulations and stay home.

The corrugated-iron shacks typically house between three and seven people -- hot, cramped conditions that are made even worse by the lockdown. By RODGER BOSCH (AFP)

"People want to listen. People want to comply and they are trying," he told AFP. "But the conditions are not conducive for that compliance to happen."

Water trucks meanwhile have struggled to squeeze into the more densely populated parts of Khayelitsha, where shacks sit almost on top of one another with barely any road access.

"It has been three days since I have gotten water," said Yandisa Gxokhwe, rushing to fill as many buckets as possible when the truck finally arrives.

Unemployed at 24, Gxokhwe shares a two-bedroom make-shift home with his girlfriend and baby daughter.

"I'm worried about the coronavirus," he sighed.

"They said everyone must stay inside. But now I don't have water so I must go somewhere. I don't have a choice."