By Charles Helm - The Conversation 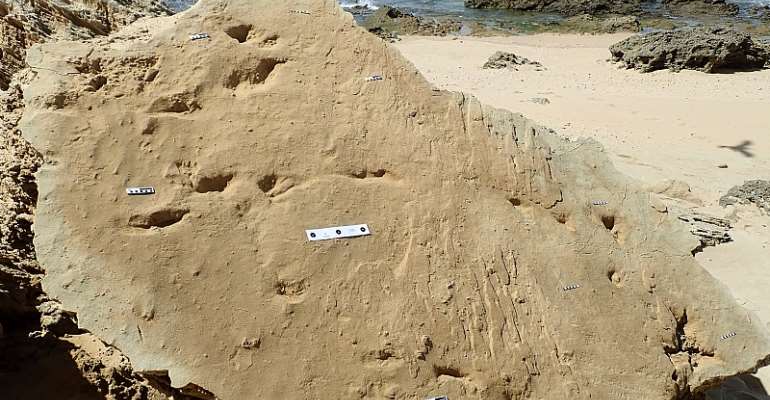 Reptile, avian and mammal tracks and Middle Stone Age artefacts on a large track bearing surface which has since been buried by a landslide. - Source: Images modified from Helm, et al. 2020. South African Journal of Science, 116

“ The Pleistocene ” often evokes images of ice ages – with much of the planet covered by great ice sheets. In reality , this geological epoch that started 2.6 million years ago and lasted until about 11,700 years ago was a time of wildly swinging climatic conditions, typically with long, cold “glacial” phases interspersed with warm “interglacials”.

On the Cape south coast of South Africa, the effects of these changes were dramatic. Sea levels dropped during the “glacials”, exposing the vast Palaeo-Agulhas Plain, and around 91,000 years ago the coastline was as much as 60 km south of its present location . In contrast, during an “interglacial” around 400,000 years ago, sea levels were as much as 13 metres above their present levels. Extensive traditional palaeontological evidence from this region, in the form of body fossils, indicates the existence of a Pleistocene megafauna, some members of which are now extinct.

However, it is becoming evident that this “body fossil record” is not complete. Ichnology – the study of tracks and traces – can complement this record. Fossil tracksites have proven their capacity to teach us the unexpected.

Today the Cape south coast of South Africa contains numerous palaeosurfaces. These rock surfaces are the cemented remains of the dune and beach surfaces that existed when vertebrates, including our Homo sapiens ancestors, were making tracks in the region in the Pleistocene Epoch.

Our research team at the African Centre for Coastal Palaeoscience at Nelson Mandela University has been able to identify more than 250 vertebrate tracksites along a 350kms stretch of the Cape south coast. Together these sites contribute to an ecological census of the diverse fauna that inhabited the coast, and they help in the interpretation of palaeoenvironment. For example, the presence in the region of giraffe and hatchling turtles is only known through our documentation of their trackways. And the early modern human presence is represented not only by tracks but also by evidence of patterns that our ancestors created on surfaces of sand.

Now we can add crocodiles to the list of ancient animals that populated this area during the Pleistocene Epoch. In a paper published in the South African Journal of Science, our team described the tracks and probable swim traces of large reptiles from this coast, from a series of sites within the Garden Route National Park. Swim traces are the traces that a swimming animal makes on the bottom surface of a body of water. Their appearance varies, depending on the water depth and the length of the animal's limbs; for example, in deep water only faint scrapes may be present where its claws or digits just touch the bottom.

While crocodylian fossil swim traces have been described from other continents , to the best of our knowledge the examples we describe are the first such reptilian swim traces from Africa. One example of hippopotamus swim traces has been reported from Kenya.

Among other benefits, understanding these palaeoenvironments and palaeoclimates (which are relatively recent in 'geological time') may help us to better understand our current challenges with climate change.

Our findings suggest, based on the composition of the rock surfaces, that the tracks and swim traces were made in a lagoon setting. The likelihood is that tracks of both the Nile crocodile (Crocodylus niloticus) and the Water Monitor (Varanus niloticus) are present.

There are no reptiles in the region today that are capable of making such tracks and traces, and there is nothing substantial to suggest their presence on the Cape south coast from the archaeological record or historical records. The current southern range limit of the Nile crocodile is from a site many hundreds of kilometres to the northeast, where a population was introduced.

These findings therefore probably indicate that there was once a more extensive range for the Nile Crocodile and the Water Monitor. Given the ectothermic biological requirements of large reptiles, we can infer a warmer climate, probably during a warm “interglacial”.

Embedded in one of the palaeosurfaces, which contained multiple large reptile trackways, as well as mammal and avian tracks, we found two Middle Stone Age stone artefacts, pictured below. We cannot be certain what they were used for, as we were not permitted to remove them for detailed analysis. But their presence suggests something which had not previously been documented: a spatial and temporal association in this environment between humans and large reptiles, or at least mutual use of habitat. Unfortunately a large landslide has subsequently buried this track-bearing surface. Middle Stone Age artefacts, scale bars in cm and mm. Authors supplied

Rock samples from these surfaces have been taken for dating. Based on previous dating studies we anticipate that the results are likely to be within the range of 158,000 years to 70,000 years. Obtaining an accurate date would establish the approximate moment in time when these tracks were registered, and would help to corroborate the Middle Stone Age appearance of the stone artefacts.

These discoveries illustrate again the potential of ichnology to complement the traditional palaeontology record, and to contribute to the understanding of Pleistocene palaeoenvironments, in an area which is of great importance in the study of modern human origins.

Charles Helm does not work for, consult, own shares in or receive funding from any company or organisation that would benefit from this article, and has disclosed no relevant affiliations beyond their academic appointment.