By Camille Malplat with AFP bureaux in Africa 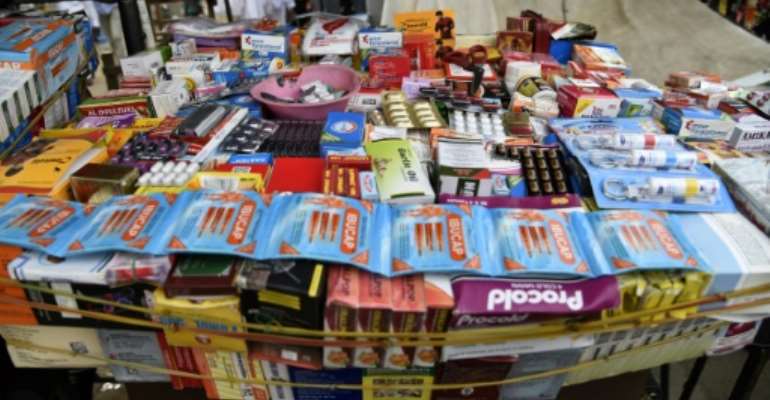 Despite loud appeals for caution, Africans are rushing to embrace chloroquine, the venerable anti-malaria drug touted as a possible treatment for coronavirus.

From hospitals in Senegal to pharmaceutical companies in South Africa and street sellers in Cameroon, chloroquine has fired hopes of a medicinal fix against a virus that is set to scythe through Africa's poorly protected countries.

Chloroquine and derivatives such as hydroxychloroquine have been used for decades as cheap and safe drugs against malaria, although their effectiveness in this field is now undermined by growing parasite resistance.

Small-scale tests in China and France -- either unpublished or outside the rigorous framework of mainstream drug trials -- suggest that chloroquine reduces virus levels in people with coronavirus.

On March 24, President Donald Trump said chloroquine could be a "gift from God" -- a comment that sparked strident criticism.

Health watchdogs have issued calls for caution until larger clinical trials are carried out, and there have been several recorded deaths from self-medication because of toxic side effects.

Despite this, in many settings across Africa, chloroquine has been placed in the front line against coronavirus.

Its rise stems partly from desperation, given Africa's meagre capacity to deal with a pandemic on the scale seen in Europe or the United States.

Around half of infected people in Senegal are already being prescribed hydroxychloroquine, Moussa Seydi, a professor at Dakar's Fann Hospital, told AFP last Thursday.

Every patient who was recommended the drug accepted it, "with no exceptions," he said.

In Democratic Republic of Congo, President Felix Tshisekedi last week declared it was "urgent" to produce chloroquine "in industrial quantities".

South Africa has already said it will join a large-scale trial, and one of the country's biggest pharmaceutical companies has promised to donate half a million pills to the health authorities.

Even if the effectiveness of the drugs against coronavirus remains for now unproven, concern about securing enough of them already runs deep.

Two decades ago, Africa, the continent worst hit by HIV, was last in line to get new antiretroviral AIDS drugs when the treatment emerged from the labs.

"If it turns out that chloroquine is effective, Africa, which imports most of its drugs, perhaps won't be a priority for (the pharmaceutical) industry," said Professor Yap Boum of Epicenter Africa, the research arm of the medical charity Doctors Without Borders (MSF).

France has already imposed a ban on exporting chloroquine and Morocco has requisitioned all stocks of the drug.

"You won't find any in pharmacies in Yaounde, everyone is out of stock," Boum said, referring to the Cameroonian capital.

"Local people have been buying it, apparently without prescription, which is dangerous."

Chloroquine, used for decades to fight malaria, is one of the best-known drugs in the world. By GERARD JULIEN (AFP/File)

The Cameroonian government has officially asked health professionals "not to yield to the desire for profit" and to avoid prescribing chloroquine preventatively.

AFP correspondents report frantic demand in pharmacies in Abidjan, Ivory Coast's economic hub, in the Angolan capital Luanda and also in Malawi -- one of a handful of sub-Saharan nations where there are still no recorded cases of coronavirus.

The rush is a deep source of anxiety for people with the auto-immune disease called lupus, which is also treated with chloroquine.

In the Gabonese capital Libreville, Armelle Oyabi, head of an association of people with lupus, has been closely monitoring purchases at the only pharmacy left in the city that still has chloroquine.

"I check that the drug is being given to people who actually need it," she said.

"If we can't get this drug, we will not only be hit by lupus but also be more vulnerable to coronavirus."

Chloroquine has been part of the medical toolkit from before World War II -- it was developed in 1934 as a synthetic derivative of quinine.

Alice Desclaux, a doctor at the Institute of Development Research (IRD) in Senegal, said the risks from self-medication from chloroquine were largely rooted in illegal sales.

"Chloroquine has always been on sale informally in Africa," she said.

African countries need more labs to test for coronavirus and hospitals across the continent lack intensive-care beds and ventilators. By Seyllou (AFP)

"It's still used to cause abortions" and even for attempted suicide, Desclaux said.

In one backstreet pharmacy in Douala, Cameroon's economic hub, the manager said he had run out of stock.

For anyone who wished to order some, "careful, the price has gone up," he said. A pill now changes hands for the equivalent of 71 US cents (65 euro cents), four times more than a month ago.

The chloroquine craze is not just affecting the black market for drugs -- it is also spurring the production of counterfeit medications.

Cameroon's government has already issued a warning about fake chloroquine, samples of which have surfaced in health centres.