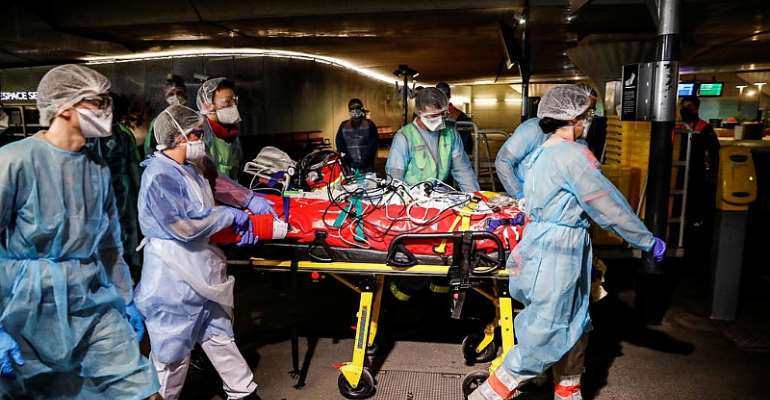 French health officials reported Tuesday evening that 3,523 people have died of Covid-19 in France, including a record 499 in the previous 24 hours, as the country entered a third week of confinement to contain the spread of the new coronavirus.

In a daily update on how the health system is faring in the coronavirus epidemic, French officials reported 499 deaths in hospital over the previous 24 hours, the largest ever single-day number, up from 418 the previous day.

The new deaths mean 3,523 people have died due to Covid-19 in France since the beginning of the epidemic, for the first time surpassing the official mortality figures from China (3,312).

New cases continue to rise
Officials have acknowledged that unrecorded deaths in nursing homes and in private homes mean France's Covid-19 mortality is higher than shown in the official count, which includes only people with confirmed cases who die in hospital.

France also recorded its largest single-day rise in the number of confirmed cases, with 7,578 new cases, an increase of 73 percent over the previous day's increase, for a total of 52,128 confirmed cases.

There was however a much smaller rise in number of new cases needing hospitalisation (1,749, an increase of 5.7 percent over the previous day's growth). In total, 22,800 people were in hospital.

The number of new patients in intensive care rose 458, down from 475 on Monday. A total of 5,565 patients are in ICU across the country, twice the number a week ago.

One piece of good news was a record number of patients on the mend, with 1,520 being discharged from hospital, a figure far higher than previous record of 1,048 on 26 March.

Patients transferred by high-speed train
A third of deaths were recorded in the Paris region, the new epicentre of the Covid-19 epidemic in France.

To alleviate pressure on Paris-region hospitals in anticipation of a peak of the epidemic over the coming week, 36 patients were to be transferred on Wednesday to hospitals in Brittany via high-speed TGV trains.

Patients would be “monitored through the whole trip by a complete intensive care team”, said top health official Jérôme Salomon, who added 288 patients have been transferred to less saturated hospitals aorund the country over the previous two weeks.

An additional 21 patients were awaiting transfer from saturated hospitals in eastern France to ICUs in Luxembourg, Germany and Switzerland.