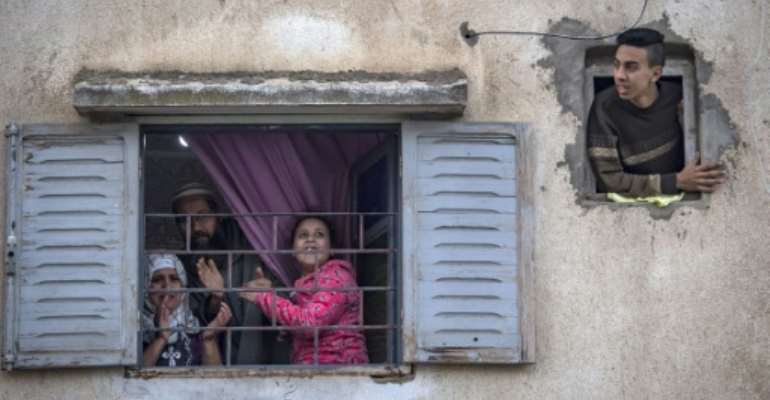 Moroccans confined at home thank the authorities from their windows as security forces and health workers instruct people to return to and remain at home as a measure against the COVID-19 coronavirus pandemic, in Rabat's district of Takadoum. By FADEL SENNA (AFP)

Isolation to keep coronavirus at bay is a tall order for Moroccans like Abdellah, who is supposed to spend days cooped up indoors without sunlight in an impoverished neighbourhood of the capital Rabat.

So he stays out in the street.

"I know social isolation is a must. But it's just not possible to stay home all day," says the 49-year-old street trader who lives with his wife and three children.

Ever since a March 20 lockdown, flats in densely-populated areas like Takadoum, which is packed with concrete buildings up to four floors high with tiny windows, can feel like virtual prisons.

Those who respect the stay-at-home rules gather inside the gates of the buildings just to kill time. Many venture out.

"We're just overcrowded and it's not easy," said Soufiane, 32, who lives in a two-bedroom flat with his parents and five siblings, although he is aware of "the seriousness of the illness and importance of quarantine".

Soufiane made a living by selling clothes at a local market, which is closed and whose neighbourhood is hemmed in by checkpoints.

Neighbour Abdelkhalek, 52, said his five-member family could put up with living "on top of each other in 40 square metres (430 sq ft) but how can we do that without an income?"

He continued: "Conditions to live a decent life just don't exist in many homes."

Moroccan authorities have deployed police, soldiers and even armoured cars in some towns to enforce the lockdown, as the country's death toll from the coronavirus pandemic rose to 33 on Tuesday out of 574 declared cases.

Apart from isolation measures, which have been imposed around the world, Morocco has also adopted economic and social measures to assist companies, workers and those dependent on social services.

State aid of between 800 and 1,200 dirhams ($80 to $120) is to be allocated for needy families to weather the crisis, from a $3.2-billion emergency package also funded by corporate and private donations.

But you need to be registered, and the bulk of the North African country's workforce is made up of "informal workers".

"I've got nothing at all. How am I going to buy my food? I really don't know, I'm lost," said Soufiane.

"Go inside, it's better for you! Protect yourselves from this terrible disease!" an officer called out over a loudspeaker.

Moroccan policemen instruct people to return to and remain at home as a measure against the COVID-19 coronavirus pandemic in the capital Rabat's district of Takadoum. By FADEL SENNA (AFP)

Most comply without hesitation, others dash out for a last urgent bit of shopping, while some re-emerge once the patrol is gone.

The routine, watched from small windows and rooftops, often filmed on mobile phones, provides one of the rare distractions of daily life under lockdown.

Around 450 people have been arrested for breaching the public health state of emergency across Morocco, according to the latest official figures.