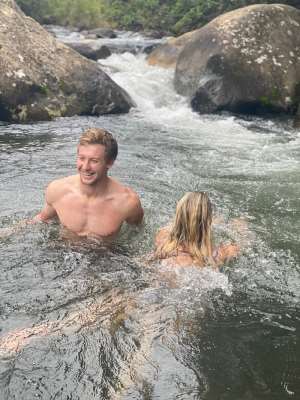 South African Victor Lange came to the United States to play golf for Louisiana Tech in Ruston, Louisiana, where he had a successful college career, capping his four years by earning Conference USA Golfer of the Year. The Johannesburg native graduated in 2015 and turned pro, joining PGA TOUR Latinoamérica in 2018. Lange had just begun his third PGA TOUR Latinoamérica year when the Coronavirus pandemic caused a postponement to the 2020 season. Following the Tour’s Estrella del Mar Open in Mazatlan, Mexico, the first event of the season, Lange returned to South Africa and tested positive for COVID-19. He remains in quarantine in Durban, South Africa.

Last week, I was supposed to be in Argentina, playing in PGA TOUR Latinoamérica’s Buenos Aires Championship. I was really looking forward to that event. It is where I played my first PGA TOUR Latinoamérica tournament, in 2018. I tied for 58th that week, and last year, after rounds of 68-70-69-70, I tied for fifth, three shots out of the playoff Andres Echavarria won. I’ve had some really good results in Argentina, so I was quite excited for the Zurich Argentina Swing, that tournament the first of three consecutive in the country. Obviously, though, plans have. It’s what happens when a global pandemic grips the world and you contract what is known as COVID-19 to earn the dubious distinction as the first professional golfer with coronavirus.

What’s been odd about all this happening is the season started out as planned. I played in the season-opening event, the Estrella del Mar Open, in Mazatlan in early March, and I didn’t have any symptoms in Mexico. I was completely healthy.

Just to get to Mexico was quite a long journey. I flew 16 hours, Johannesburg to Atlanta, then from Atlanta to Mexico City and from Mexico City to Mazatlan. That week, I played the first two rounds well. I opened 66-67, and at 11-under I was two shots off the lead heading to the weekend. I didn’t have a good third round (3-over 75), and although I shot 3-under in the final round, which is normally a good score, around there you had to go a lot lower. I tied for 51st.

I still felt great, so much so that I played a game of tennis with fellow player Matt Ryan on Sunday after the final round. We were out there for hours. Before that, I was throwing the football around with Brian Hughes, who I was paired with in the final round. No signs of coronavirus, no thoughts of coronavirus, and the next morning I did the journey back to South Africa.

As soon as I got back to Johannesburg, I flew to my parents’ home in Durban. The next day, March 10, I went on a little vacation with a group of eight friends, including my girlfriend, Gabriella, to an area about a two-hour drive from Durban. We went on a hike in the Drakensberg Mountains and were gone for two nights. After that, we went to the beach for a bit more holiday.

On Saturday, March 14, Gabriella hurt her toe and ripped off her toenail. We thought her toe might be broken, so I took her to the ER early that evening. Once at the hospital, because of what was going on, we were both screened for coronavirus and they asked a bunch of questions about symptoms, such as cough, fever, sneezing, that sort of thing. We said no to all of those, but when they asked if we had been out of the country in the last 21 days, I had to say yes. Hospital policy dictated that I receive a coronavirus test.

I totally understood the concern, but it was actually quite frustrating because Gabriella’s toe was hurt, and it was like I was the patient even though I was taking her to the hospital. They were checking me out before helping her, the one who was in pain. Added to my frustration is I had zero symptoms, I was feeling healthy and was trying to get them to take care of Gabriella. They told me the test results would come in a day or two.

We returned to Durban on March 15, and since we were tired from the trip, we slept in Tuesday and spent the day at the house. I was sitting on the couch with Gabriella, with my parents – Richard and Suzette – nearby when I got this phone call from a random number. I stepped into another room to take the call, and a doctor told me that she had my coronavirus test results in front of her, and they had come back positive.

Again, I displayed no symptoms, and I was quite taken aback. “Are you sure you did the test correctly?” I asked.

“So, what do I do?” I asked, and the doctor told me to keep a cool head, understanding that I had been in contact with Gabriella and my parents. We all had to be quarantined for 14 days, and at that point it really didn’t matter if Gabriella or my parents should be tested. They had been exposed, and they were basically ordered to go into quarantine, as well.

Looking back, Gabriella and I have since realized that if she hadn’t hurt her toe, we would have never found out about my positive test because neither of us had symptoms. We would have come home and been in close proximity to my family and Gabriella’s. She lives with her brother, sister-in-law and their 7-month-old baby. We would have both gone to our homes and possibly infected our families.

After my diagnosis, my first phone call was to my buddy Martin Rowher, one of my close mates and a professional golfer on the Sunshine Tour. I had gone on a 5K run with him Sunday. He was my first phone call because we had run together and sweated together. After that, we informed all the people who went with us on vacation, and I sent an email to Claudio Rivas of the PGA TOUR Latinoamérica staff, letting him know. I also spoke with Patrick Newcomb, who I roomed with in Mazatlan, Matt Ryan and Brian Hughes. I wanted to make sure everybody I was in close contact with knew, and the TOUR told me it would send out a message to all players and staff. I very much appreciated that because I wanted everybody to be aware what was going on.

Since that phone call with the doctor, I’ve felt fine. I’ve also thought back about how I may have gotten this virus. I don’t think I got it in Mexico, but I believe it was probably in one of the airports on my way home to South Africa or possibly on the airplane because of the higher risk associated with airline travel and the circulated, filtered air in a closed space. If one person has it on a flight, there is a good chance everybody on the flight got it. But that’s all speculation. I could have gotten it in South Africa at a restaurant. Who knows?

I certainly have had to find ways to keep busy during this quarantine period. In the initial first couple of days, I was in contact with so many people letting them know what happened. Then my story hit the news, and people were sending me messages. I also ended up talking to several news outlets. It was quite a big story here in South Africa, so my first two quarantine days were quite hectic. I appreciated the interest and felt like the media were using my story to spread a bit of ease among the public, that I had the disease, but I was feeling fine. The message in each story I participated in was that I am doing what the health professionals were telling me to do, so in that sense it was a good story that maybe gave people some peace of mind, which isn’t a bad thing.

Since that initial rush, I’ve gotten into a bit of a routine. I work out each day, doing the same thing a bunch of buddies who are professional golfers are also doing. At the end of our workouts, we all have to do a little video that we post that proves that we did it. In between, I’ve also been getting a lot of rest.

Another interesting aspect of my life right now is we don’t have wifi at the house here. My parents are kind of old-fashioned, and they’ve really never needed wifi. We’ve always had TV and a good subscription. So, I haven’t been able to log on to Netflix or other platforms. On the positive side, it’s been nice spending time with family—from a distance (it’s 1.5 meters here)!

We got re-tested last Wednesday. Gabriella and I put gloves and facemasks on, and we drove to a drive-through testing facility where you don’t have to get out of your car. They swab your throat or nose, get your sample and you’re on your way. It’s actually quite cool. That’s been it—a drive from home to the testing facility and back home. The good news is we both tested negative, so Gabriella never tested positive although we suspect she did have coronavirus.

The negative results were obviously very welcomed, and we’re happy about that as it has allowed us to be a bit more relaxed at home. All along, my main concern from the moment I found out I was positive wasn’t really for myself because I always felt that I would be OK and that Gabriella would be OK. The biggest worry was for my parents. I would have hated to have infected them with COVID-19. That would have been the worst. To show what kind of parents I have, when we were on our way home from Durban after the initial test, I called my dad and asked him if he thought we should maybe check into an Airbnb and wait until the test results came back. He was like, “No, no. You haven’t been home for a while, you’re feeling good. Please come on home.” I was like, all right.

For the last 10 days, I’ve mowed the lawn, trimmed the hedges, stuff like that. I’m getting pretty good at that—just like when I was living here full time as a kid!

Gabriella is still with us. I guess, technically, she is allowed to go home. But she’s staying here because since our self-imposed quarantine, the country entered a 21-day lockdown. We’re in Day 5, with 16 to go. What that means is I’m basically going to spend five weeks inside, not counting the day I went out for my last test or when I go outside to do yard work or swing a golf club. We have quite a big backyard, and I can chip if I want. I’ve been swinging a little every day to remember what a golf club feels like. I’ve been thinking about putting up a net, but I haven’t done that yet. We’ll see.

Sitting on the couch sure doesn’t feel quite right to me, though. December and January are when you work so hard for the upcoming season, and then this is the time to really start playing. Instead, we stopped playing after one week.

I don’t know how to label these times, really. These are the worst times the whole world has faced in decades. They’re really unprecedented for everybody. We all have to keep cool heads and do what the health professionals are telling us to do, and it’s our job to get on top of this and slide down the infection rate and get the society healthy again so we can all get back doing the things we love to do.

For me, that thing is golf.