Covid-19! Is The Publicity Enough? 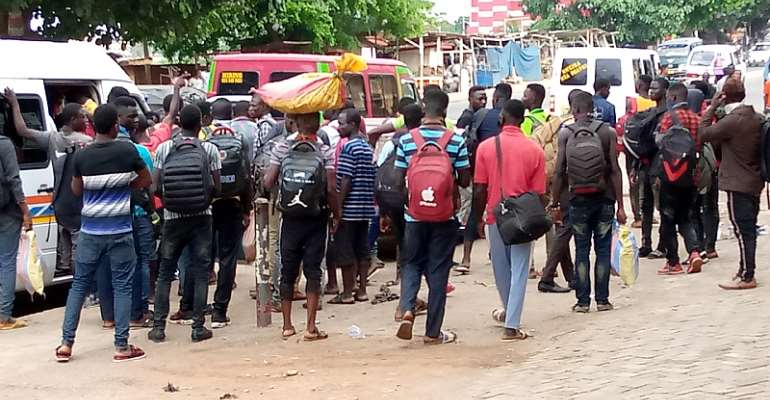 The upsurge of the novel corona virus also known officially as covid 19 has by far being talked about at almost every quarter of the world. The situation in Ghana is not different as the media has made frantic efforts to expose and make it known to all and sundry living across the nation. Day in day out it could be seen that various media try as much as possible to create the awareness of the general populace on the ever increasing rate of the covid 19 pandemic. The question however is; are some people really aware of this deadly pandemic or are they just reluctant to adhere to the safety protocols as postulated by the WHO?

I recently travelled from Southern to Northern Ghana. Throughout the journey, I made several observations of which I would like to share.

The first observation was on the wearing of mask and use of the recommended alcohol based hand sanitizers. I realised that a lot of people were hovering about without wearing mask. I do not dispute the idea of not wearing mask because the WHO recently advised that the wearing of mask should be encouraged for persons who already have contracted the disease and also frontline health workers. The few whom I saw in the mask wore it with impunity. At the bus station, I noticed that the wearing of mask was like fashion, as many people were spotted taking selfies with the mask on in order to post on social media. They usually would adjust the mask with their possibly contaminated hands after a couple of shots because I didn’t see anyone with a hand sanitizer. Also people were spotted removing their mask ‘to breathe some fresh air without the thought of sanitizing their hands. The most irritating aspect is that several others were seen spitting and coughing out indiscriminately, contrary to the protocols set by the WHO and the Ghana heath service (GHS).

The second issue I observed whiles on my way to the bus station and at the bus station was the issue of mockery. I heard a commercial vehicle conductor (trotro mate) say ‘’ you those using the mask and the hand sanitizers are likely to be infected with the disease first.’’ Upon hearing this, I marvelled and wondered why such discouraging words could come from the mouth of a person with the fore knowledge of what is happening across the globe currently. So, I raised my head to have a full glimpse of him. I wasn’t surprised he wasn’t observing any of the safety protocols as I saw him put his finger in his mouth in order to count the money in his possession. Another hilarious situation which caught my attention was a staggering and hungry looking man who openly yelled at the passengers that ‘’ whether corolla or be it Corinthian virus, but he still survives.’’ The man as I observed had his hands all over his face as he blew his nose, itched his faced and spat indiscriminately. Also, the issue of social distancing as recommended by the WHO, was not observed at all at the bus station. Several others were seen teeming up in a rush to board the bus. Others too were seen walking in groups to God knows where. The pictures below show some evidence.

I wondered whether these people are well informed of the global pandemic called covid 19. In my curiosity, I approached one of them as to whether he is aware of the pandemic and he said, ‘’ it is the white man’s sickness, so he is not worried’’. His response gave me a hint that people are really not concerned about the recent happenings in Ghana and the world at large.

Back home in Northern Ghana, I realised that the behaviour of people were not different from that which I experienced in the south. My community is Muslim dominated with few Christians. Per my few days of stay at home, I realised that churches do not hold their normal Sunday service and the Muslims do not observe their normal Friday Jumah prayers in the mosque as directed by the President. However, day in day out, I still see Muslims troop in and out of their various mosques every day except on Fridays to pray. This practice got me thinking as I wondered whether the restriction to pray was only binding on Fridays on the part of the Muslims. I heard some of the community members say they decided that only the men should congregate in the mosque to pray whiles the women prayed at home.

In the mosques as I know majority of the congregation are male dominated with a handful being females; mostly the elderly women. So the idea of allowing only the males to go and pray makes no difference. Other issues related to social distancing are not observed. The youth in my community are seen playing football almost every evening.

The major means of transport is the tricycles. I observed the tricycles still take the usual number of people they use to take and even more. I just wonder if people really are concerned about their own lives and that of their neighbours. Life over here in my community back north still goes normal as if nothing is happening. I still believe that the general public has been duly informed just that the attitude of the black man and for that matter the typical Ghanaian still remains indifferent to situations.

Therefore, I would like to use this medium to encourage all and sundry to adhere to all safety protocols in order to remain safe. Remember your safety depends on the safety of your neighbour. Let us all come on board and help eradicate this deadly pandemic from Ghana and the world at large.

Opinion
Powered By Modern Ghana
Importance Of Upper West Youth Groups And Their Odiousness In Society
Do We Still Have Landlords Like This?
Elections 2020 In Ghana: The New Media Technologies Are A Way To Go
The Journey To Greatness; Lessons From The Ghana Card Registration Experience
The Kayayee Conundrum; A Situation That Requires Urgent Fixing
The Role Of Mindset In Economic Development: Fixed And Growth Mindset:  Part 2
I Wish My Kids To Enjoy My Sweats But Not Pay For My Shame
I Welcome Mahama's Promise To Establish Morgues For Muslim Communities
Reflections Of Farmers Day For Farming Countries
COVID-19 Updates Live Dashboard
TOP STORIES