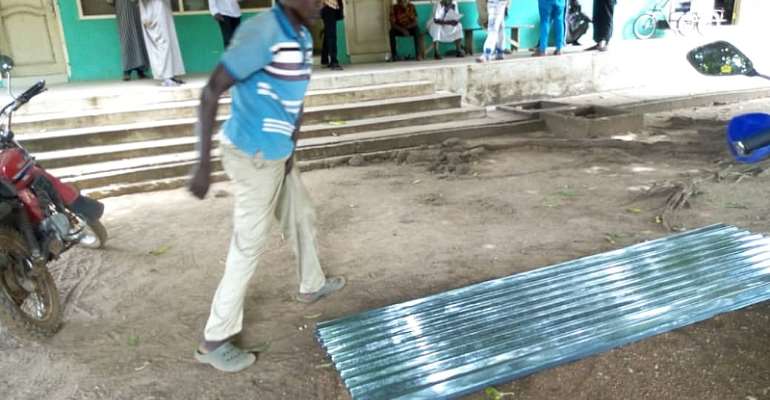 The Member of Parliament for Bimbilla, Dominic Nitiwul has donated 45 packs of roofing sheets and 50 bags of cement to assist victims ravaged by last week’s rainstorm in Bimbilla.

Over 20 people had their houses destroyed by a heavy storm that hit Bimbilla in the Nanumba North municipality.

Foodstuff were also destroyed leaving the victims to depend on family and friends for shelter and food.

Following this, a report was made to the National Disaster Management Organisation (NADMO) for assistance.

During the presentation, Municipal Coordinator for NADMO in the Nanumba North Municipality, Maawundat Benard, told Citi News that the gesture was to help reduce the suffering of the victims as some were without rooms to lay their heads.

“When it happened, some people didn’t have places to lay their heads and I think this would cushion them so that they can maintain their homes and live with their families. The MP has provided 45 packages of roofing sheets and 50 bags of cement to help the victims.”

Some of the beneficiaries expressed gratitude to the MP for coming to their aid.

“My eight rooms were destroyed by the storm and we didn’t know where to go and had to seek shelter with friends. I am happy that they have come to our assistance and I pray that many philanthropists will come and support us. I have been given two packs and I want to thank them for the good gesture,” Madam Parker

“I am happy for the intervention and I want to say a very big thank you to the MCE and his staff,” another victim.

They were given between half pack to two packs depending on the extent of damage one suffered from.