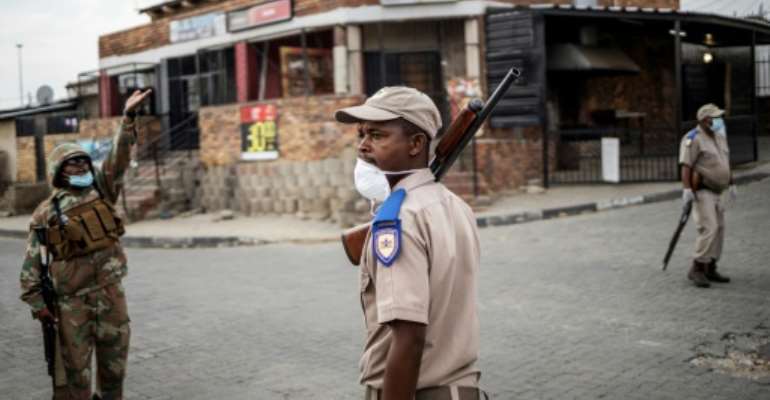 Soldiers tower over youngsters in South Africa's Soweto township, forcing them to do push-ups and roll on the floor as punishment for not adhering to a lockdown meant to halt the spread of coronavirus.

Caught on camera and circulated on social media, they added to a string of videos purporting to show violence by security forces deployed to enforce curfew and confinement across Africa.

Rubber bullets, tear gas and whips have been used to maintain social distancing in shopping queues and to discipline citizens caught outside their homes without valid reason.

"It seems to be the only way in which authorities know how to deal with the populace, through violence and humiliation," said Amnesty International's Shenilla Mohamed, executive director for South Africa, adding that abuse had also been reported from Zimbabwe, Kenya and Nigeria.

South African police are investigating the deaths of three citizens allegedly killed by patrols for defying the lockdown, which came into force last Friday.

"That's almost the same amount of people that have died from coronavirus," noted Mohamed, referring to the nation's latest death toll of five.

One person was allegedly shot by police on his way home from a bar -- a direct breach of regulations prohibiting the sale of alcohol during the 21-day shutdown.

To date coronavirus has infected more than 5,690 people in Africa and killed at least 195, according to an AFP tally.

The pandemic has been slow to reach the continent, despite an acceleration in recent weeks, and numbers remain relatively low compared to other parts of the world.

Dozens of African governments have made use of the extra time to roll out curfews and shutdowns earlier than their worse-hit counterparts in the West.

But such measures are difficult to enact in countries where most people live in poverty and work informally, often in packed urban slums with little access to sanitation.

"If we take measures which starve everybody, they will quickly end up being defied," said Benin's President Patrica Talon on Sunday, adding that his country lacked the means to enforce public confinement.

As governments have struggled to keep citizens indoors, their security forces have been quick to fall back on intimidation tactics, raising widespread concern.

The Kenyan port city of Mombasa has seen police firing tear gas and whipping those out after curfew. By - (AFP/File)

"It is unacceptable to see such inhuman and degrading treatment against the population," tweeted Nicolas Simard, Canada's ambassador to the Democratic Republic of Congo, in response to a video of masked policemen beating a young man to the ground in the capital Kinshasa, which went into lockdown last week.

"This is uncalled for and inappropriate," tweeted Mombasa governor Hassan Joho after police charged hundreds of commuters waiting for a ferry in Kenya's port city.

Clad in riot gear, they fired tear gas at the crowd before the start of a dusk-to-dawn curfew, forcing people to the ground and whipping them.

The Mombasa Law Society denounced the police intervention as "excessive" and "detestable".

Uganda's army meanwhile apologised for a "high-handed" response after security forces violently cleared the streets in the capital Kampala, causing an outcry.

Uganda's army apologised for a 'high-handed' response after security forces violently cleared the streets in Kampala. By Badru KATUMBA (AFP/File)

In a separate incident, two men were hospitalised after being shot by police for violating a restriction on public transport.

In one video, officials force three young men to do squats after they were caught exercising at night.

"No torture, no inhuman degrading treatment and no excessive use of force," pleaded Amnesty International's former West and Central Africa director Alioune Tine.

Police eventually assured that all "excessive interventions" had been punished.

Yet the risk of a beating has done little to stop citizens across the continent from pursuing their daily activities.

The need to make a living trumps both fears of catching the deadly virus and encountering the police, prompting law enforcement officers to step up their show of force.

More than 1,100 people have been arrested for lockdown violations in South Africa, while Ivory Coast has detained 450 for failing to respect curfew.

Ivory Coast has detained 450 for failing to respect curfew. By ISSOUF SANOGO (AFP/File)

Ivorian Human Rights Movement (MIDH) chief Doumbia Yacouba said many of the detainees had been beaten and mistreated.

"It is unacceptable and it adds to the psychosis created by coronavirus," he said.

Further cause for concern emerged when Kenyan police called for an inquiry into the death of a 13-year old boy felled by a bullet allegedly fired by police as they cleared a slum area last week.

Human Rights Watch has called for urgent investigations into all abuse allegations and "disproportionate" use of force.