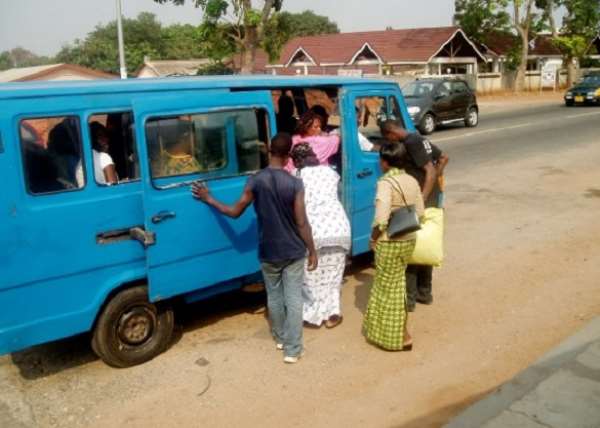 Some passengers heading towards Enchi and other hinterlands from Takoradi in the Western Region have appealed to government to help enforce the social distancing rule in commercial vehicles.

Citi News' check at the Enchi station in Takoradi saw drivers still loading to full capacity; a situation passengers have opposed and insist is endangering their lives.

Some passengers who spoke to Citi News said the drivers rather asked them to share the fee for any seat left as a condition to respect the social distancing directive.

One lady said, “We are going to Enchi. When we got to the station to buy the ticket, one of the authorities said the drivers are supposed to reduce the number of passengers in the car. But another also said if that is the case, then the passengers would have to pay extra for the empty spaces in the car. And that is not what the government said. So the government has to do something about it so that they will reduce the numbers in the cars to avoid spreading the coronavirus.”

“We are from Takoradi heading towards Enchi. What we were told is that we are to sit in threes instead of the usual four on a seat. But the drivers said we are to maintain the four. So I am pleading on the government to reduce the price of fuel so that the drivers reduce the number of passengers they pick. It will help so that they won’t complain about running at a loss…because we are so close to each other and no one knows who has the disease or not,” another passenger lamented.

Road Transport Operators, after consultations with the Ghana Private Transport Union (GPRTU) and the Ghana Road Transport Coordinating Council, have announced some measures to curb the spread of the Coronavirus disease (COVID-19) in the country.

The move is among others aimed at ensuring that precautionary directives given by President Nana Akufo-Addo on social distancing are observed on all public transport vehicles and terminals.

The following measures were agreed on and are binding on all members:

President Nana Akufo-Addo in an address to the country on Sunday, March 15, 2020, tasked the Ministry of Transport to collaborate with the various transport unions in the country as well as transport operators to ensure that passengers commute on vehicles that are in hygienic conditions.

He also made a case for the provision of sanitary items including hand sanitizers, running water and soap at the various terminals to reduce the chances of spread of the virus.

“The Ministry of Transport should work with the transport unions and private and public transport operators to ensure enhanced hygienic conditions in all vehicles and terminals, by providing, amongst others, hand sanitizers, running water and soap for washing of hands,” he said as he announced new public gathering advisories in a televised broadcast.