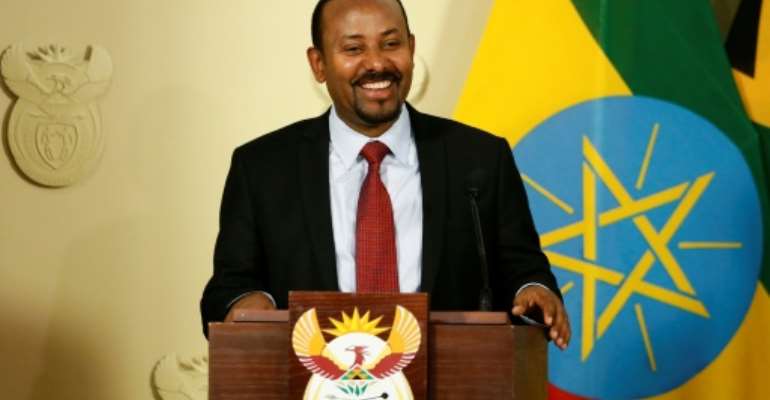 Abiy's rule has been marred by widespread ethnic violence. By Phill Magakoe (AFP/File)

Ethiopia's election commission announced Tuesday that general elections due in August would be delayed because of the coronavirus pandemic, in a setback for the country's fragile democratic transition.

No new timeline was given for the vote, which Prime Minister Abiy Ahmed -- last year's Nobel Peace Prize laureate -- hopes will give him a mandate for sweeping political and economic reforms.

"Because of issues related to the coronavirus, the board has decided it can't conduct the election as planned... so it has decided to void that calendar and suspend all activities," the poll body said in a statement

It said a new date would be given "when the pandemic is over".

Ethiopia has recorded 26 cases of COVID-19 and federal and regional officials have introduced a range of measures intended to curb its spread, including banning large gatherings and restricting travel.

These measures would have prevented the timely completion of activities like voter registration and the recruitment and training of observers, the election board said.

Abiy was appointed prime minister in 2018 after several years of anti-government protests.

He rose through the ranks of the Ethiopian People's Revolutionary Democratic Front (EPRDF) ruling coalition, which dominated parliament and allowed only one competitive election after it took power in the early 1990s, which was in 2005.

However the coalition no longer exists following Abiy's decision to transform it into a single political group, the Ethiopian Prosperity Party.

Well before the onset of the coronavirus pandemic, opposition parties and analysts had voiced concern that the election board's preparations were behind schedule.

The scheduled date of August 29 had also been a point of contention because it falls at the height of the rainy season.

Yet election officials had previously said they could not delay the vote because the constitutional mandates of lawmakers expire in October.

It was not immediately clear how officials intended to address that problem should the coronavirus pandemic push elections into late 2020 or even 2021.

Abiy's rule has been marred by widespread ethnic violence, and critics accuse him of cracking down on political opponents and other dissenters.

Grim security conditions in parts of the country like Wollega, where the military is conducting counterinsurgency operations against a rebel group, have called into question how the government could possibly hold voting there.

The delay could potentially give the government space to address major obstacles to a peaceful and credible vote, said William Davison, Ethiopia analyst for the International Crisis Group, a conflict-prevention organisation.

"Although the circumstances are deeply worrying, the delay does offer an opportunity to reset Ethiopia's troubled transition," Davison said.

"A start would be the ruling party discussing with opponents critical topics such as the conditions for a fair election, transitional justice and reconciliation, and the federation's major political faultlines."

Jawar Mohammed, a leading opposition politician, told AFP he was not surprised by the delay but said the opposition would need to be consulted on next steps.

"We knew it was coming," he told AFP. "But the new timetable cannot be done by the ruling party alone."

‘We Won’t Tolerate LGBTQ+’ —Ga Chiefs back criminalization b...
21 minutes ago