Central Park drafted into US fight against coronavirus 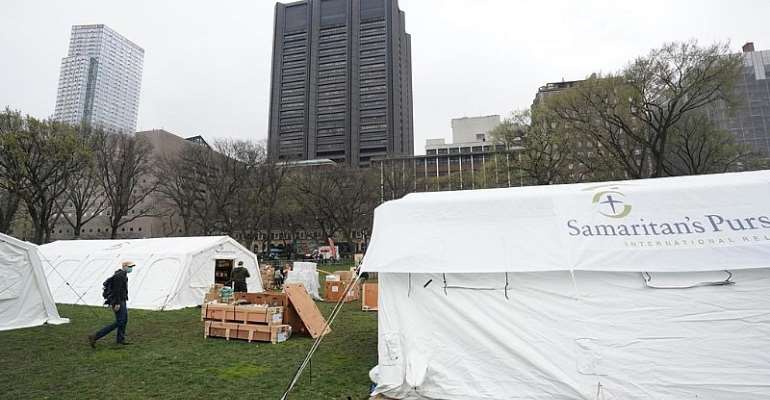 Central Park, New York's most famous green space, was drafted into the battle against the coronavirus on Tuesday with the opening of a field hospital to cope with the overflow coronavirus cases in the city.

Funded by the evangelical Christian group Samaritan's Purse, the 14 tent site around the park's 97th Street Transverse and Fifth Avenue will offer 68 beds to patients from the Mount Sinai Health System. It will also house a morgue.

The impromptu venue arose just hours after the official death rate in the US from coronavirus edged past 3,000. Another 20,000 people were also confirmed to have tested positive for the disease to take the national total to just over 165,000.

The US Army Corps of Engineers, which converted a New York convention centre into a 1,000-bed hospital, says it is searching for hotels, dormitories, convention centres and large open spaces to reconfigure for medical use.

"We're looking right now at around 341 different facilities across all of the United States."

On Monday, the US navy hospital ship Comfort docked in New York to take up to 1,000 non-coronavirus patients. Another temporary hospital is planned for the Arthur Ashe Stadium at Flushing Meadows where the US Open tennis tournament is scheduled to take place between 31 August and 13 September.

"People need to stay at home," Adams told Fox News. "We're working around the clock to get supplies to cities across the country - to mayors and to governors."

He added: “But we are not going to supply our way out of this problem. The way we solve this problem is by everyone coming together, stopping the spread, by eliminating large gatherings.”