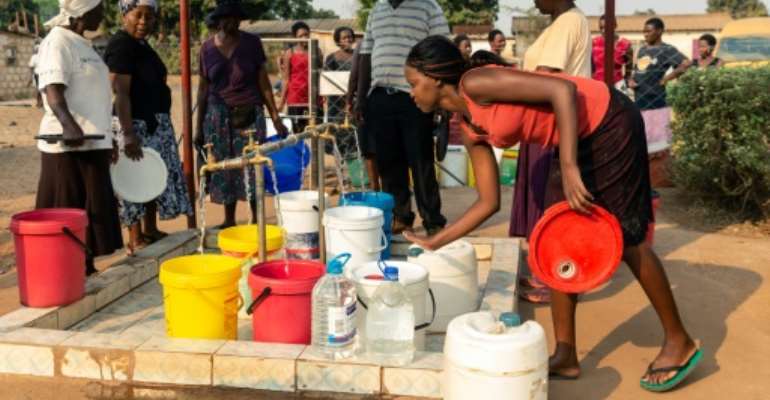 Buckets and jerrycans in hand or in wheelbarrows, dozens of Zimbabweans stand close to each other in a long queue, patiently waiting at a borehole in Harare's middle-class Mabelreign suburb to collect water.

While this is a daily sight, this week things are different.

The water-short southern African country is starting to enforce a 21-day lockdown to try contain the spread of the deadly coronavirus.

People are supposed to be observing social distancing, stay indoors and above all, wash their hands regularly. But these instructions will not be easy to follow.

"Of course I have heard about social distancing," said 16-year-old Maxel Chikova.

"But people were already queued up like this when I joined the line, so I just hope nobody has the virus."

In the same queue is another teen, Winnet Mgaramombe, who is not in school because of the virus restrictions.

"We have heard about the coronavirus but we need water for domestic use, so corona or no corona we shall come to get water," she said, carrying a yellow bucket.

The scene is played out all over greater Harare.

City authorities have struggled to constantly supply water to the capital city of 4.5 million residents for many years.

Across town in Mbare, the largest high density township, the queue is even longer.

There are many people milling around.

Housewife Epiphania Moyo had been in the queue for a good part of the morning and is well aware of the need for better hygiene to halt the spread of the virus.

"Of course, we have heard about coronavirus, and we try as much as we can to wash our hands, but sometimes we would rather put it to other domestic uses."

Hand sanitisers are a luxury she cannot afford.

"That's for the rich, not for us who live in the ghetto."

Coronavirus has brought Harare's perennial water woes under the spotlight.

Some parts of the city have gone for almost two decades without running water.

For the majority, public boreholes are the only option. By Jekesai NJIKIZANA (AFP/File)

The well-to-do have drilled boreholes in their properties while the enterprising make money vending and delivering water in mobile tankers to those who can afford it.

For the majority, public boreholes are the only option.

On rare days, water trickles out of taps, but it is of questionable quality and is at times smelly.

When run in a bathtub or a basin, within minutes, brown gooey sediment settles to the bottom.

A 2019 recent study by South Africa-based Nanotech Water Solutions found that Harare's water contains toxins that can cause diseases of the liver and affect the central nervous system.

While the underground water from boreholes is widely believed to be safe to drink, a 2018 cholera outbreak which killed nearly 50, was traced to a borehole in a Kuwadzana township.

An underground sewer pipe had contaminated the water.

Harare City Council cites a shortage of money to purify the water.

It says the water purifying plants, built during British colonial rule, are woefully inadequate to supply the city's burgeoning population.

The water distribution pipes date back to more than five 50 years ago, and half of the purified water is estimated to be lost through pipes bursting.

The government has been silent on how it will provide water to those whose taps have been dry for years or those whose supply is sporadic.