New discovery: penguins vocalise under water when they hunt 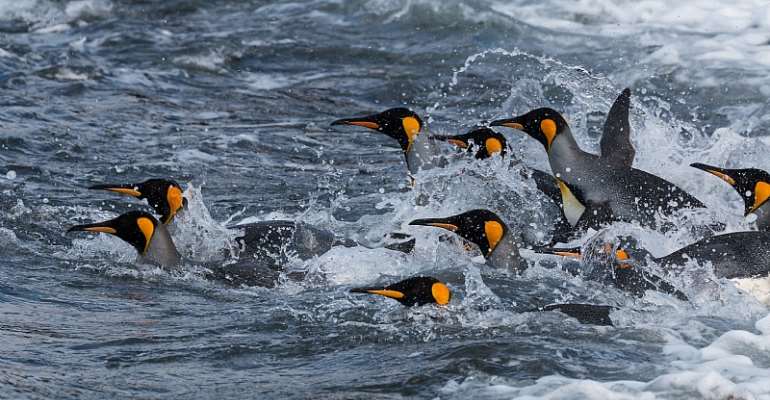 Penguins, like all seabirds, are known to be highly vocal on land where they come to breed. They use these vocalisations to help them recognise their mate and kin.

Outside of the breeding season, seabirds spend most of their life at sea and are adapted to the marine environment where they feed. Penguins are very unique among seabirds for their extreme diving abilities. They can perform series of dives to depths of between 20 and 500m (depending on the species) in search of fish, krill, or squid.

Given the penguins' diving abilities, we wanted to know if they produced sound underwater. To do this, our Marine Apex Predator Research Unit (MAPRU) team at Nelson Mandela University (South Africa) attached small video loggers, with built-in microphones, on the back of three species of penguins: the King penguin, the Gentoo penguin and the Macaroni penguin.

Our study provides the first evidence that penguins emit sounds under water when they hunt.

Because of recording difficulties, very little was previously known about the vocalisations of penguins when they are at sea. However, thanks to recent developments in technology, such observation becomes accessible , in particular through the use of miniaturised penguin-borne video loggers.

We used video loggers and recorded 203 underwater vocalisations from all three species over almost five hours of underwater footage: 34 from two King penguins, a single one from a Macaroni penguin and 168 from Gentoo penguins.

These species were chosen because they reflect the diversity of feeding strategies in penguins. The King penguin is specialised to feed on fish at a substantial depth ( 200m ), whereas the Macaroni penguin feeds mostly on schooling krill within the first 10m of the water column . In contrast, the Gentoo penguin displays a very diverse foraging strategy, feeding on all sorts of prey at all depths .

The birds were caught as they left their breeding colonies at Marion Island (a sub-Antarctic island off South Africa) on the way out to the sea. We then retrieved the cameras after a single foraging trip.

We found that all vocalisations were short and emitted during dives when the penguin was hunting. Most vocalisations (73%) happened during the bottom phase of the dives. This is where penguins mostly catch their food, as opposed to the descent and ascent.

Here is a video showing a full dive by a King penguin, as observed from the penguin-borne video loggers:

Here is a short clip showing only a few underwater vocalisations associated with prey capture:

Our findings on their vocal behaviour were totally unexpected, though some of the penguin acoustics experts on our team in France had their suspicions about what we might discover.

We already knew that the use of vocalisations at the sea surface was related to group formation in the Gentoo penguins and that African penguins vocalise from the sea surface mostly when commuting (possibly to keep contact with one another) and foraging on bait-balls (possibly to synchronise their behaviours).

There is also evidence which shows that other air-breathing marine predators – such as dolphins , seals and marine turtles – produce sound under water. So why not penguins as well?

From our observations, new questions have arisen. For example, how are penguins able to produce such sound under water, given the high pressure at depth? And why are they vocalising under water? Are all these vocalisations signalling the same information? Do they produce other underwater vocalisations in different contexts? Are they related to physiological needs for a predator diving and feeding in apnoea – to adjust buoyancy ? Could they have a function in social interactions ? Could they be part of a hunting technique and be used to startle prey ?

We hope recent developments in technology will continue to provide more insights into the penguins' fascinating behaviour.

Isabelle Charrier and Thierry Aubin do not work for, consult, own shares in or receive funding from any company or organization that would benefit from this article, and have disclosed no relevant affiliations beyond their academic appointment.