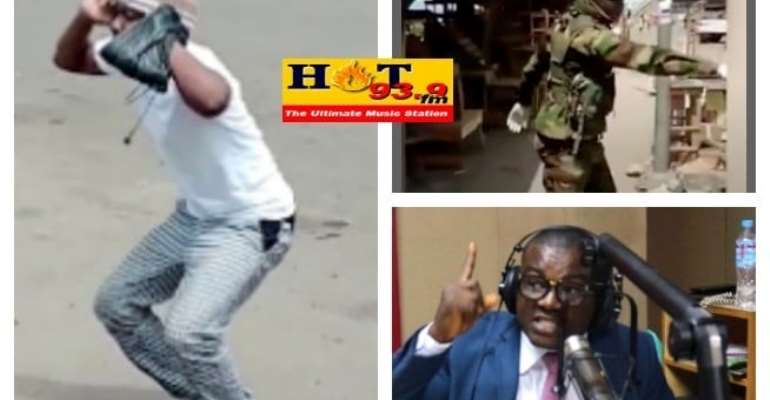 Ace presenter, Boamah Darko has given a standing ovation to the Soldier who instructed a Kasoa resident to undertake frog jumps on the streets as punishment during the first day of the partial lockdown.

The soldier who was part of the military deployed to enforce law and order during the period of the partial lockdown was seen in a video, instructing the civilian to move onto the main road to do the jumps as punishment for attempting to video the security team.

Ever since the video surfaced online, the culprit Soldier has received a hefty public backlash for perpetuating the act. Lieutenant Colonel Appah, the Commanding Officer of the 64 Infantry Regiment of the Ghana Armed Forces (GAF), speaking in an interview revealed that the Armed Forces will punish the officer accordingly when he is found.

But sharing his view on the matter on his show,”Maakye” on Accra-based Hot 93.9FM, Boamah Darko lauded the culprit soldier by indicating angrily that:

”You see, allow the soldiers to do their work…Ghanaians are not law-abiding …if the soldiers don’t act strictly, Ghanaians would continue to come out which would permeate the spread of the virus…so I ,Boamah Darko would give a standing ovation to the soldier…he has really done well”.Boamah Darko stated.

According to the “Maakye” show host,”The soldiers must continue to discipline the recalcitrant civilians..it’s not always that people who flout the law must be taking to court.Even though I believe in the rule of law, sometimes let us allow instant discipline…they should keep beating them”.

Shatta Wale to spend another night in police cell; to face c...
56 minutes ago