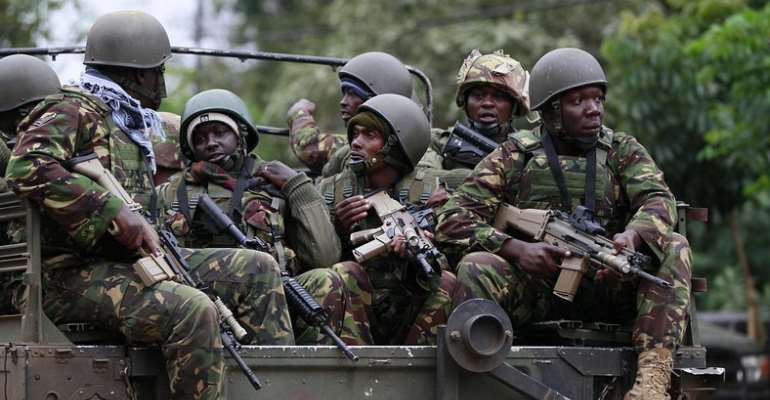 The uniform, as well as to be "uniformed" is an honour. In ancient cultures, it was the sense of honour, as opposed to shame, that drove people into the warrior group. In pre-colonial states in what became known as the Gold Coast, not to join the warrior group was a dent on man's masculinity, especially among the Ewe and the Akan. Men who failed to fight during conflicts were the targets of women’s songs of insinuation and ridicule. The Spartans developed the art of fighting to the extent that to be Spartan was equivalent to exuding fearlessness and bravery. To join the fighting group was such pride that it was reported that when one of Alexander's soldiers ran away from the battlefield, Alexander rebuked him. Alexander, who claimed the Macedonian throne at the age of 20 years, had at the age of 30 years conquered the ancient world. He was so fearless that he told his soldier, who happened to be called Alexander, that “You either change or name or change your conduct.”

The joy and pride in wearing the uniform were coveted. Nations fought for offensive and defensive purposes. Because of territorial aggrandisement, which defined resources from the perspective of what nature provided, warring was part of the norms of the ancient world and in the early part of the modern world. Even in our modern world, the zest and messianic ambition to uphold one’s national sovereignty compelled many men and women to wear the uniform. This explains why, historically, many people sought glory in the army than in many other things.

We appreciate the good work our men and women in the uniform are doing. They sacrifice their lives to defend and protect us against external aggression. They risk their lives bringing peace to nations ravaged by protracted civil wars. The constant danger they face in the war front and the constant threats of life feed into the philosophy of the training of the military. Many soldiers, as part of their training, are told that soldiers do not die. As children, we dreamed of also joining the army for us to live forever. I was, therefore, active in my area’s Boys’ Scout Movement, which Lord Baden-Powel, parodied from the Asante military formation (Okum apem a apem be ba).

My community’s Boys Scout Movement, formed at Maamobi (Nkumbe ase) in 1992 was led by our seniors, including Kennedy, Dange, Addo, Kofi, and Dotse. Our joy in the Boys' Scout was bolstered by our visits to 37 barracks to see real soldiers training. On a few occasions, we went to Burma Camp to pick mangoes and to feed our eyes on disfunctional armoured cars. But most importantly, our morale was boosted by the annual military march pass that saw soldiers parading the streets from their various camps in Accra through the Maamobi/Nima highway to independence square (?). This was always the delight of June 4 celebration for some of us in Ghana before the practice was (rightly or wrongly) abolished by H.E John Kofi Agyekum Kufuor.

As part of fate playing tricks on us, none of our leaders nor any of us joined the military. But we cherished the discipline that the Scout Movement brought to us. We had to learn the drills. Memorials the rules. Pray. Learn how to search for a lost item. We also learned to bond in defence of each other. This was necessary for conviviality in a community where childhood life was also about the survival of the fittest (taakashi and bugashi). Most importantly, we learned to behave wisely, because we were told foolish people could not join the army (wo ni chikpi a wonko soldier to wit, “if you are not wise, you cannot join the army”). Perhaps, one of the greatest myths we learned was that the military demanded one to have a solid heart and a steel back that did not tolerate indiscipline. The pre-military experience in the Boy’s Scout has guided some of us until now.

Unfortunately, while our soldiers are nurtured into the art of discipline, some of them are indiscipline. We keep watching graphic video footages of some soldiers subjecting civilians to torture. This is simply because a civilian was said to have flouted the rule on the lockdown declared by the president, H.E. Nana Addo Dankwa Akufu-Addo. Apart from these reports, we often hear about some soldiers going on a rampage to attack a whole community, just because one soldier had been attacked. Investigations into such indiscipline actions by the military are hardly made public, which contributes to the myths about the invincibility of the military. I propose two things that make some soldiers mess up on the streets. The first is their possession of weapons of destruction. The incessant military interventions in African politics, with Ghana recording five main successful coups, was because the military in Ghana had a monopoly over the gun. In the event of an economic morass, they complain by turning to the gun. They do not respect the ballot box. They rather cherish the barrel of the gun. Sadly, they are not trained to be good civilian administrators and so their intervention in our politics stampeded our nation’s progress. On the street, the cow people into submission with the gun!

The second reason why some soldiers mess up on the street is because of the myth that soldiers do not die. This myth has both good and bad sides. The good side is that it emboldens them to face threat and fears and even risk their lives to save lives. In extreme scenarios, it leads them to lay their lives down for civilians. Bravo on that! But the bad side is that such a psychological prop kept in unbalanced scale leads to some soldiers misbehaving. They demonstrate unnecessary bravery on the street even when they are not threatened. They fail to discern between moments of war/civil unrest and moments of peace. This lack of discerning has contributed to the bully civilians receive from some soldiers, including the recent ones we are observing. The same idea that soldiers do not die feeds into the strong bond that exists among soldiers. This has been referred to as esprit de corps. It is the kind of inspiration that urges soldiers on even in the face of hardship. But the collective challenge of facing threats bond soldiers more than most cognate institutions like the police service. Sadly, such a brilliant expression of gregariousness is usually abused by some of our men in the uniform.

The way some of our soldiers are either threatening and/or beating civilians at the least provocation is a blot on the military. It also shows that the efforts at taking the soldiers back to the barracks and refashion their relations with civilians, started by the former president, H.E John Kofi Agyekum Kufuor, in Ghana's Fourth Republic are still miles away from becoming a reality. The military in the modern era thrives on brain and brawl, but more so the brain. In the face of biological warfare, including the possibility of the COVID-19, as opposed to pitched battles of the premodern era, the military should deploy more intelligent skills in advancing the socio-economic development of the nation. Elsewhere in Asia, the late industrialised countries in the world were propelled to development either by trained and disciplined soldiers or with military philosophy.

I, therefore, urge the military to redefine their philosophy in synchronizing with the demands of the rubrics of the “modern” world. I am aware of many postgraduate students who now go into the military. While this portends a good shift from the buga buga force (beat, beat in Hausa language) of the colonial establishment, we expect to see more reforms in the military. The military needs to be reformed to purge it of all the unfortunate legacies of colonialism. This is precisely because, currently, we have observed that just as the colonialist thought Africans were insubordinate and must be cowed to submission with brute force, including physically maiming the colonial subject, our soldiers are virtually doing the same against their own kin and kith. We want to see the military not as a brute force against civilians as it was used to defend the architecture of colonialism. we want to see the military re-psyching themselves to intermesh with civilians in birthing Ghana’s long-awaited development.

I salute my basic schoolmates who are in the army: Issaka Sulemana and James Harry Sawyer. I also pay homage to my paternal grandfather who fought in the World War II in Burma, India, and my maternal grandfather who was also in the army for many years before he retired. May their souls continue to rest in peace. To all other soldiers, may God help you as you safeguard the nation against COVID-19. Please be patient with civilians.