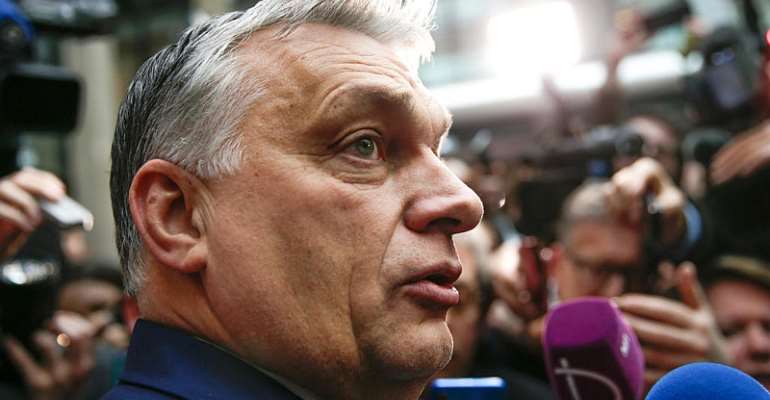 Critics at home and abroad have condemned the "anti-coronavirus defence law", saying it gives Orban unnecessary and unlimited power and is a means of cementing his position rather than battling the virus.

After declaring a state of emergency on 11 March, the new law gives Orban the power to indefinitely rule by decree until the government decides the emergency is over.

It removes the current requirement for MPs to approve any extensions to decrees. Elections cannot be held either during the emergency period.

It also introduces jail terms of up to five years for anyone spreading "falsehoods" about the virus or the measures against it, stoking worries for press freedom.

The measures came into effect at midnight on Monday.

The parliament, where Orban's Fidesz party enjoys a dominant two-thirds majority, passed the bill by 137 votes to 53.

"At the end of the emergency, all powers will be fully restored" to parliament, said Orban after the vote, dismissing opposition fears of a long-running period of rule-by-decree.

The vote marked another controversial milestone in Orban's fractious decade in power.

Since the self-styled "illiberal" nationalist won power in 2010, he has transformed Hungary's political, judicial and constitutional landscape.

Among the international bodies expressing concern over the bill before it became law were the UN human rights office, the Council of Europe, and the Organization for Security and Co-operation in Europe.

Orban has given short shrift to criticism of the coronavirus law, accusing critics of alarmism and telling "European nit-pickers" to let Hungary defend itself against Covid-19.

Opposition fear the worst
Last week, opposition MPs warned they did not trust Orban not to abuse indefinitely granted special powers. They refused to support fast-tracking the bill without time deadlines.

Many cited a so-called "state of crisis caused by mass migration" that Orban's ruling Fidesz party declared in 2016 and which remains in place, despite migration numbers to Hungary having fallen sharply since then.

Pro-government media had accused the opposition of encouraging the virus by rejecting the bill.

The fiercely anti-immigration Orban has blamed migration for bringing the virus to Hungary, saying "primarily foreigners brought in the disease".

The first two confirmed coronavirus cases in the EU member state of 10 million were Iranian students.

Hungary has since reported a total of 447 cases with 15 deaths. More than 13,300 tests have reportedly been carried out.

‘We Won’t Tolerate LGBTQ+’ —Ga Chiefs back criminalization b...
52 minutes ago