Algeria's Bouteflika languishes at home a year after his fall 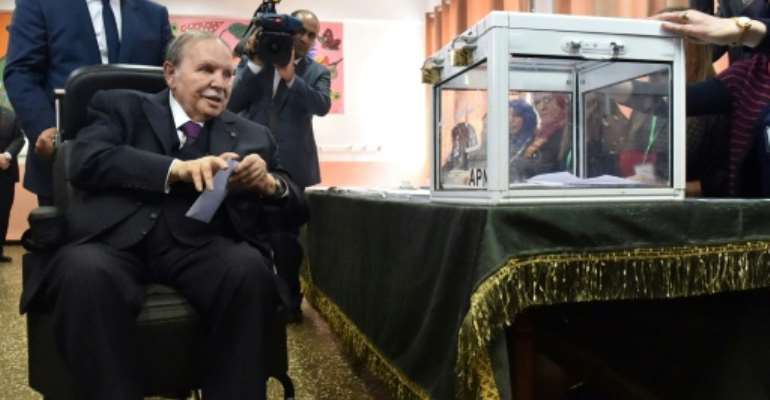 A year after the unexpected downfall of Algeria's longtime president Abdelaziz Bouteflika, the ailing octogenarian remains holed up in his plush and medically adapted home, with his detractors still demanding justice.

Bouteflika assumed the presidency in 1999, reigning omnipresent over Algeria's political life until a stroke rendered him largely invisible in 2013.

Since he resigned under pressure from protesters and the military in April 2019, the public has heard nothing from him.

His last appearance was on April 2 last year, when he spoke on television to announce the end of his rule.

His downfall had become inevitable after weeks of massive protests that followed his declaration early last year that he would run for a fifth term. Eventually the army, then led by Ahmed Gaid Salah, cut him loose.

Since then the former leader, who turned 83 in March, has only rarely left his coastal home in the capital.

"He lives surrounded by his sister and a medical team," a source close to his entourage told AFP.

Bouteflika continues to "enjoy all the privileges" befitting his rank as a former leader, according to Mohamed Hennad, a former political science professor at the University of Algiers.

But virtually nothing is known about his daily life.

"He receives few visits. He is confined to his wheelchair and remains virtually speechless," said Algerian journalist Farid Alilat in an interview last month with Le Point newspaper.

"However he is aware of everything that is happening in Algeria," Alilat added.

Bouteflika's isolation has not stopped some public figures demanding he face justice for the corruption that infected the country during his 20 years in power.

Algerians can never turn the page on the Bouteflika years unless he is tried for the painful damage inflicted by his rule, said Hennad, who is now an analyst close to the "Hirak" protest movement that forced Bouteflika from power.

Algeria's judiciary has since Bouteflika's fall prosecuted and in some cases imprisoned a slew of former politicians and influential businessmen for abusing their privileges and links to the ex-president's clan.

Nacer Djabi, a prominent sociologist, argues the former head of state should appear in court -- "even symbolically" -- as recent cases have portrayed him as "the godfather of corruption".

Yesterday's news -- the front page of a newspaper, the day after Bouteflika's fall. By RYAD KRAMDI (AFP/File)

"He shouldn't escape punishment. That's a demand of Algerians who have discovered with horror the extent of the damage caused by this man and his family," Djabi told AFP.

Abdelaziz Rahabi, a former diplomat and one-time minister in the first Bouteflika government who went on to become an opponent, also called for his prosecution.

The former president "has a responsibility for the corruption. He covered it up," Rahabi said in a television interview.

"A judgement would be symbolic," he said, stopping short of calling for Bouteflika's imprisonment in light of his poor health.

On the other hand, the ex-president's brother Said Bouteflika -- an influential adviser considered the real holder of power in the country during his tenure -- is languishing in prison.

Said Bouteflika was in September last year sentenced to 15 years in jail for plotting against the army and the state, a sentence that was confirmed on appeal in February.

The Hirak protest movement has vowed to find new ways of challenging the establishment, after calling off protests due to the coronavirus pandemic. By RYAD KRAMDI (AFP/File)

Algerians have clearly moved on from Bouteflika's rule, according to political scientist Hasni Abidi.

But "they have the sentiment that while the man is gone, the bad practices persist and the system that made Bouteflika what he was remains in place," he said.

The same followers and cronies "are ready to cluster around a new patron, reproducing the same network in an undemocratic system," Abidi added.

A reinforcement of the status quo is the Hirak movement's main fear.

Protests have been suspended in the face of the coronavirus pandemic, but Hirak supporters vow to continue their struggle, in order to overhaul the entire ruling system that has been in place since Algeria's independence in 1962.